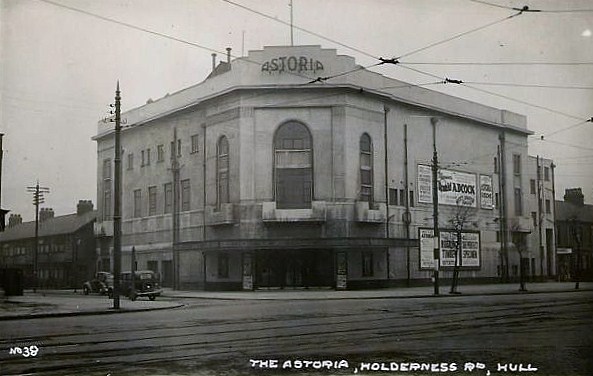 Situated in the suburbs at the junction of Holderness Road and Lake Drive, the Astoria Cinema opened on July 30, 1934. It was designed by architect James E. Adamson of London and Hull and constructed by Messrs Markwell, Holmes and Hayter Ltd. A Compton 3 Manual, 8 Rank organ (with illuminated console) was installed (now in a York Museum) and it was opened by James Swift.

Seating was 1,000 in the stalls and 500 in the single balcony -above which was a large saucer dome with concealed lighting.

The proscenium was 50 feet wide and a small stage and dressing rooms were provided, but these seem to have been seldom used. The stage scene doors have been bricked up.

In 1935 it was taken over by the County Cinemas circuit, but returned to a independent operator a year later.

It closed after 29 years on 7th June, 1963 and immediately reopened as the Astoria Bingo Club - well over 45 years on this continues successfully.

The Astoria Cinema is largely unaltered inside, very attractive, and is extremely well maintained. It should be with us for many years yet!

An auditorium view of the Astoria in its present use as a bingo club here:
View link

A shot from April 2009, repainted and with a new canopy:–

The Rolling Stones played at the ABC (Regal) Hull in 1964. It was a much bigger theatre.
There is a YouTube video here:

what was showing at the Astoria Cinema, Hull on the night of 9 July 1956. The nighht my wife and I met. One was bing Crosby and Bob Hope Road film but i can'r remmeber which

@ Cravenb Visit Local Library. They should have copies of Local newspapers..

Thanks for the tip

Thanks again Mike. I visited Hull History Centre this morning and there was the detail om microfiche