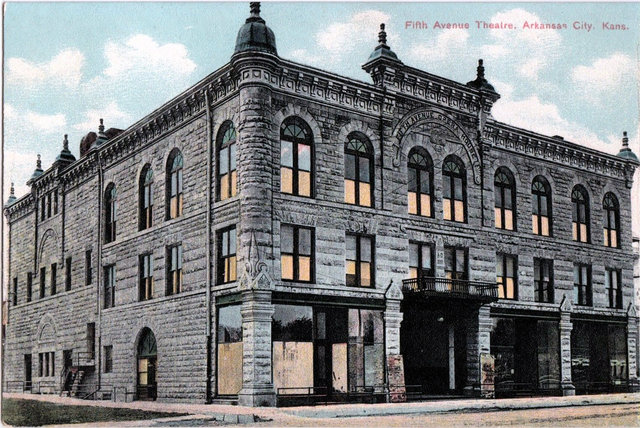 Opened prior to 1897. "Built at a cost of over $100,000 and regarded as one of the finest buildings of it’s kind between Kansas City and Denver by the theatrical groups which performed there. After the demise of most road shows and vaudeville, this theater was converted into a motion picture theater and was operated by "Slim" Richardson and Andy Anderson." quoted from the Arkansas City Traveler newspaper.

It was listed in the 1914-1915 edition of American Motion Picture Directory.

A quick peek at street view confirms that there is nothing like this on Fifth Ave. Demolition confirmed.

Fifth Avenue Opera House was located at 225 East Fifth Avenue. The building was demolished and the Arkansas City recreation center was built at this address.

Was that building built as a rec center? It’s got some neat deco touches, although the opera house was far superior. Surprised something that big was so far out of downtown, although I assume the enormous expanse of parking lots probably used to be something more interesting.

The building that occupies the same spot as the 5th Ave Opera House is indeed currently the Ark City recreation center. But it was originally built (in the 1940’s, I believe) by Spencer-Ralston VFW Post #1254.

Thanks for the info!

The Fifth Avenue Opera House in Arkansas City is listed in the 1897-98 edition of the Julius Cahn Official Theatrical Guide. It had 1,400 seats and Frank Hess was Mgr. Ticket prices 25 cents to $1. The theater was on the ground floor. The proscenium opening was 36 feet square, and the stage was 40 feet deep. There was one daily newspaper and 4 weeklies. Hotels for show folk were the Gladstone and the Midland. Railroads were the Santa Fe and the Frisco. The theater had both electric and gas lighting. The 1897 population was 9,000.