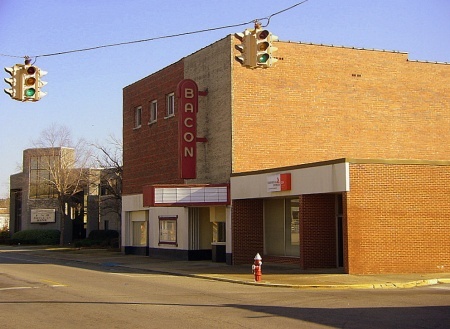 Getting off the interstate one finds quite a few old theatres. The Bacon Theatre in Alma, Georgia is a gem find in South Georgia. It had been closed for a while when I visited, but in pretty good shape. Maybe, today the city of Alma has saved the Bacon Theatre.

Nice one sheet frames in the front. Plate glass window leading into the theatre after you visited the box office where I am sure the manager could set and watch friends come to the "picture show" as the South Georgians would say. I looked in the office through the dirty dusty glass and saw the desk with papers and such just telling myself I bet this place is filled with one sheets and lobby cards. The managers office looked just like it did when they closed. Of course, that’s been years ago someone either got a treasure of theatre history with the books and magazines I saw, or it was sent to the dump.

Looked for the owner of the Bacon Theatre and found that Stein Theatres ran the small Family Drive-In in Alma, so I am betting most likely they ran the Bacon Theatre unless someone finds out different. You don’t know how bad I wanted to explore that old theatre, but at the time I couldn’t.

The Bacon Theatre was reopened in July 2012 as a first run movies & live performance theatre.

Nice photo of the Bacon:

Yep,That is the theatre i saw.I am so glad they saved it. Thanks for getting the picture on SiliconSam.

Various items in Boxoffice present a somewhat puzzling picture of the theaters in Alma. Here is an item from March 18, 1939, datelined Alma: “The Strickland Bldg here has been leased to Mr. Stein, owner of the Alma Theatre for 10 years. It is being remodeled and will be converted into a theatre.” That’s the only mention of the Alma Theatre I’ve found, and I’ve been unable to find any more mentions of the theater that was supposed to open in the Strickland Building either.

Then Boxoffice of June 24, 1946, said: “James E. Smith expects to open his new Bacon Theatre in Alma, Ga., about the first of August.”

In 1948, several items were published about a lawsuit filed by the Bacon’s operating company, the Alma Amusement Company, against several film companies and L. A. Stein. I haven’t found how the case was decided.

A September 23, 1974, Boxoffice item has a puzzling number in it. It says: “Charley King, staff advisor at AIP, may have set a record for a leisuretime activity. He has been booking the little Bacon Theatre in Alma, Ga., for 36 years for a small group of Alma businessmen who keep their theatre going as a community project.” If the Bacon opened in 1946, I don’t see how, 28 years later, Mr. King could have been booking it for 36 years. Did Boxoffice get the number wrong, or was there an earlier Bacon Theatre?

Thanks Joe.They must have got their numbers wrong unless they were thinking of the Drive-in there.

The Bacon Theater has been completely renovated with seats restored back to orignal state. Everything has a fresh coat of paint and it is scheduled to reopen showing movies again on July 4, 2012. Community extremely excited about its revival. Local Dance Company having a recital there this weekend.

What great news, way to go Alma, you saved a classic treasure, thank you, thank you.

Does this actually show movies? They have no website, no one answers the phone number, and the only mentions I can find on the web are for live music or high school plays.

The Bacon Theatre is owned and operated by the City of Alma. It was recently remodeled and really is something to be proud of. We have live performances, dance recitals, and yes, they do show movies every weekend. You can find them on facebook at https://www.facebook.com/pages/Bacon-Theatre/450979908265502 and also on the City of Alma’s website at http://www.cityofalmaga.gov/index.php.

The City of Alma’s website link works if you do not include the last period. Facebook link works for me.