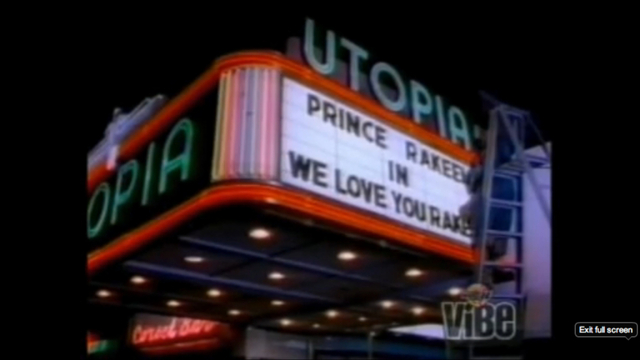 The Utopia Theater stood mid-way between 188th and 187th Streets on Union Turnpike in Jamaica, Queens.

Opened on January 1, 1942, no one could call this tiny theater a movie palace, but to all who went there, especially the children, it offered all the excitement and wonder of any theater 50 times its size. The marquee of the theater (topped by large, round, red Art Deco style letters that spelled its name) was so small that many titles of films had to be abbreviated. Also, the names of stars had to be brought to their shortest form. So it was that J. Allyson starred with V. Johnson in “Hi Barbaree” and B. Grable and D. Daily appeared in “Mom Wore Tights!”

The outer doors of the Utopia Theater led into a small, wide lobby, with one sheets of coming attractions in glass showcases, covering its walls. The ticket booth was on the far right of the lobby, facing the theater, and across from it, a long stand, behind which stood the ticket taker. The Utopia Theater was owned by an unlikely pair. Mr. Paul Raisler, a short, jovial, Jewish man, and Miss Wright (no one knew her first name), a tall, Wasp-y lady who, in her man tailored suits and swept up hair, looked very much like a young Katherine Hepburn (Wright sold the tickets/Raisler took and ripped them).

Inside the theater, the auditorium was to the right while the ladies and gentlemen’s rooms were to the left, in a recessed lounge area. Between the rest rooms was a water fountain, above which was a long hard plastic cylinder holding cone shaped paper cups. The cups started out costing a penny, then were given away for free and then disappeared altogether, leaving their dispenser as a reminder of what had been.

There were two candy machines in the lounge area, and the “ching” of the coin being dropped, the “ka-chung” of the plunger under the selection being pulled, and the “thunk” of the candy hitting the bottom opening could be heard all through the show. No one cared. It was the Utopia! The theater’s small screen was surrounded by Art Deco style half moons. It’s thin, gauzy curtains pulled sideways as the show began.

The Utopia Theater showed Movietone News and in the 1940’s there were also bond drives and kiddie shows with twenty cartoons, a serial (“The Sea Hound”, “Rocketman”), and a children’s feature, like “Bill and Coo”. On those days, and on all Saturdays, a small gray haired woman, dressed in a white nurses uniform patrolled the theater, brandishing a flashlight and a small black purse from which she gave change for the candy machines.

Though the Utopia Theater never offered stereo sound or 3-D, it did convert to CinemaScope in the summer of 1954 with “Garden of Evil”, followed by “The High and the Mighty” (the coming attractions were always preceeded by a glittering screen, lighting horizontal lines that read “Sunday through Tuesday” and “Thursday through Saturday.” (for years, Wednesdays were given over to revivals or foreign films.)

On the way out of the theater, on the back of the entry doors were small wooden boxes containing the programs telling you what was coming soon. Nothing more than folded pieces of paper with either green or blue lettering on a white background, these programs, done up in horizontal lines that formed a months grid, were an exciting extra as you left the theater. (I can still smell the fresh print of the programs on the day that the new ones were delivered to the theater!)

Mr. Raisler died first, and shortly before she herself died, Miss Wright sold the theater. The already tiny auditorium was twinned into two miniscule theaters. After a number of years, unable to keep up with the two large multiplexes only a few streets away, the Utopia Theater shuttered and was converted into a drug store around 1999.

What no one knew was that there was nothing that any drugstore could sell that could match the curative powers of the Utopia Theater when the lights went down and the screen flickered to life.

After spending a couple of years as a booker for Warner Bros. and Universal I went to work as a booker/buyer for Morty Lightstone. Hank was his nephew and left the industry. I was with Lightstone Theaters for 11 years when I took some poor advice and left the business. During this period I worked a few nights a week for Paul and Ruth, two of the sweetest people I’ve ever met. I did indeed know Tommy Pozin. His office was in the Brill Building on Broadway between 49 and 50 streets as was Lightstone’s. Sometime in ‘74 or '75 (I’m not sure of the year) Lightstone moved his office to space above the Oceanside Theater. I don’t remember who was booking for Irwin Knoll, but it wasn’t us.

I know Lightstone WAS booking for Irwin Knowll, but I guess he was doing his own booking when he bought the third theatre. I can’t remember the name, but Knoll was operating the Nautilus and the Roosevelt Theatre.

I’m surprised that I never ran into you at the Utopia. Although I worked until around 1974 at the DeMille (until it burned in a fire), I lived close to the Utopia and was in there quite often to talk with Ruth.

The film companies have RUINED the business today for exhibitors. Digital projection equipment has caused hundreds of independent theatres across the country to shut down because of the high equipment costs.

We may have met but the only projectionist i remember is Sam. My name is Jordan Marks. During my tenure with Lightstone I also did a part time paid internship with RKO Theatres. The president of RKO, Matty Polan, had me working in a different RKO theater each weekend. The most interesting was the Keith’s in Flushing. I got to walk through the old Vaudeville dressing rooms behind the screen.

It was the US Department of Commerce that made me decide to leave the business. I wrote to them asking their outlook for the motion picture exhibition business. Their outlook was bleak to say the least. They predicted that in 10 years there would no longer be any independent theater owners. I guess they were right.

I worked when Sam needed to take off. Although I worked at the RKO Flushing many times, in 1975 I took Century’s Prospect as my fulltime job.

The only reason the Commerce Department turned out to be right is because the Justice Department FAILED to enforce the anti-trust laws….like they did when they RUINED Loew’s/MGM )and the other theatre chains owned by film studios (Loew’s was the greatest chain of motion picture theatres there ever was or ever will be and they destroyed them). While the “consent decrees” were purportedly meant to PROTECT the independents, you can see what they caused. You be the judge – http://en.wikipedia.org/wiki/United_States_v.Paramount_Pictures,Inc.

Thanks, Bruce. I’ll look into this group.

It’s just too bad that the former Brooklyn Borough President, Marty Markowitz, had already got the city to commit to 90 million dollars with some “developer” that was supposed to put up 5 million, to restore Loew’s Kings.

While I’m certainly in favor of saving the Loew’s Kings (they are currently working on it now), the RKO Keith’s would have been an even better choice if I could only choose one.

You might also find this book DEMO for the RKO Flushing interesting: http://www.blurb.com/books/4315941-the-rko-theatre-of-flushing-n-y

I saw Manhattan Murder Mystery at this theater in 1993.

I have an old reel of film that I took with me on the last night of business there. (I was the last manager the theater had.) The film is in a box which has Sam Conte’s name on it, who, from reading comments here, had been a projectionist there for 40 years. This box had been sitting on top of a file cabinet in the office the whole time I worked there. The film contains old trailers that show the marquee with words on the side panels such as “Feature Presentation” and “Happy Holidays” and “Coming Soon,” from what I remember. I had the projectionist use them for a little while when I took over as manager, because I thought it was so cool. But after a week or so, we removed them because I was told the film was a slightly different size than current film at the time, and might break or get caught. (This is how I remember it from way back in 1994/5, so I might be a bit wrong on the details.) I have kept the film, always wanting to somehow capture stills and print them, but I have never done it. I have no such equipment, and wouldn’t know where to bring it.

I grew up at the Utopia Theater. Now I am a film preservationist in Los Angeles as well as the head of the Cinecon Classic Film Festival in Hollywood. I can digitize the film reel of Utopia snipes if you will let me. I remember them playing in the theater. It would be a privilege to preserve them. Please contact me at

The snipes mentioned above today appeared on YouTube on the Periscopefilm channel.