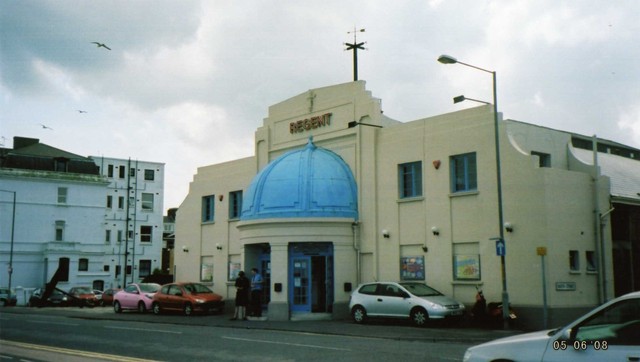 The Pavilion Theatre opened on the sea-front of Deal on 28th July 1928. It was built for and operated by Deal Council. Bookings for decent live shows soon proved difficult to maintain, so the building was converted into a cinema, to the plans of Margate architect P.V. Levett. He turned the interior around 25 degrees, so the stage end was now on the west side of the building, rather than the original southern end. This gave better sightlines for the screening of films. A café was provided in a room to the left of the entrance doors and a new projection box and offices were built in a first floor extension over the front of the building. The cinema was given a new name Regent Cinema on its opening on 13th July 1933 with the film "King of the Ritz" starring Stanley Lupino.

The Regent Cinema was closed by the Bloom Circuit on 13th July 1963, when they transferred the bingo operation across from their Royal Cinema building (the Royal Cinema then re-opened for film use). A false ceiling was inserted inside the Regent Cinema auditorium, hiding the original plaster ceiling, but it could still be viewed by peering through the portholes in the disused (and off-limits) projection box.

The bingo club at the Regent Cinema building was closed on 9th January 2009, a victim of the Government’s ban on smoking in public places. There was talk in April 2010 to convert the building into a twin screen cinema, each with 140 seats, with the remainder of the building used as a community centre or even possible use as a multi-purpose performing arts centre. It is owned by Dover District Council.

In June 2010, two businessmen purchased the building, and in June 2013, plans were announced to convert it into a 3-screen cinema, which was planned to open in late-2014.

A campaigning group to reopen the cinema on Facebook has been extended to www.reopentheregent.com where the long saga of the Regent is documented.

In November 2015 the Regent was designated an Asset of Community Value under the 2011 Localism Act, and a notice to this effect posted outside.

200 people crammed into the Astor theatre for a lively meeting about the Regent, held by the Dover DC Scrutiny Ctee. A passionate debate was held, as locals are angry re the 6 year delay. Plans for a 4 screen cinema are promised for Sept 2017. Ctee to investigate how the Council ever came to own this building and whether the ineffective covenant can be revised.

A planning application for twin cinemas and a restaurant was submitted to Dover DC in January 2019. There would be a new side entrance on the elevation facing south which is structurally unsound, and the café would have larger windows overlooking the sea.This application is broadly welcomed compared to the one with flats and less sympathatic to the Timeball tower, which was withdrawn in 2014.

The address given does not map properly on Google Maps. It is on the SW corner of Beach and South street.