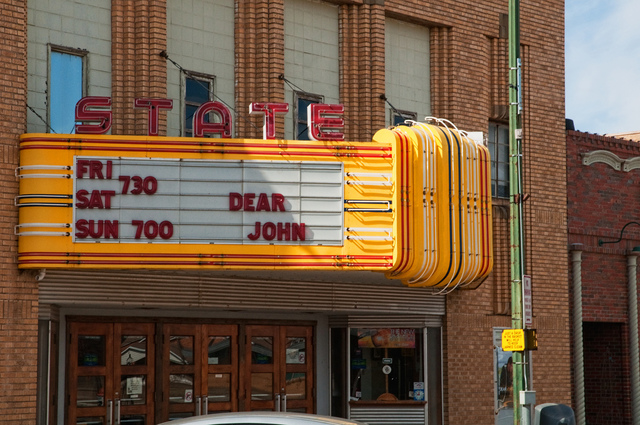 This was the second State Theatre to operate in Larned. State Theatre originally opened on April 6, 1949 with Fred MacMurray in “Father Was a Fullback”. It is the only theatre in this small town of 4,200 residents.

After being closed for two years, the old cinema reopened in early July 2002 with a theatre full of volunteers running the show. The theatre was recently renovated and its famous neon marquee is still being repaired with plans to reinstall it in the near future.

The State Theatre is located at 519 Broadway and it seated 378 people.

Here is a recent photo of the State Theatre. View link

A 1999 view of the State Theater in Larned. From the prior postings it looks like they did a very good job on the restoration work.

The State Theatre is located at 617 Broadway Street. It was the second State Theatre in town. It launched April 6, 1949 with “Father Was a Fullback.” The current theatre has 302 seats.

The official website with showtimes for the current State Theatre can be found at its Facebook site: https://www.facebook.com/State-Theatre-Larned-Kansas-273849419335/