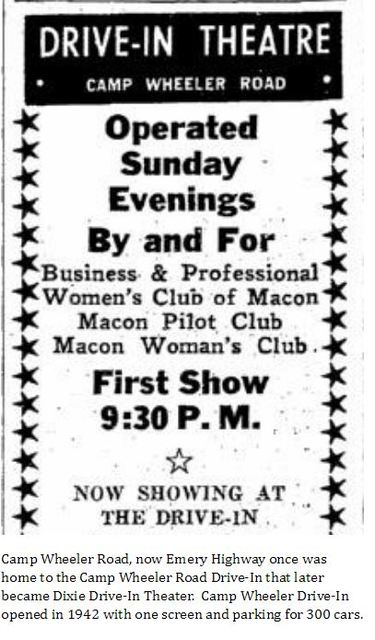 Macon had a Dixie Drive-In to serve this middle Georgia city. It opened as the Drive-In on March 13, 1942 and parked 327 cars. It renamed Dixie Drive-In in 1949 and was owned by Harris Robinson of Dixie Drive-In Theatres, and later by Macon Drive-In Circuit. It was closed in late-December 1977.

I think in the middle to late 60’s Albert Weis,theatre owner in Savannah built several outdoor screens in Georgia, I think Macon might have had one,but i don’t have that info.Hopefully,someone else will.

Macon reminds the Chief of the USS Macon. An aircraft carrier that carried 5 biplanes. It was commisioned 23 June 1933. The ship was named for the city of Macon, Georgia. Click on the link, your in for a surprise!

Great shot of a zepplin and NYC.Thanks for your service to our country Bob.

Macon did have a Weis Drive In, please refer to the 41 Drive In for details.

Call me crazy but I’m not coming up with anything at the above address on Google or Historic Aerials…Old Jefferson Road does not appear to exist in Macon, GA

Boxoffice, Oct. 27, 1956: “The marquee and office building of the Dixie Drive-In on the Jeffersonville road were destroyed by fire during a driving rain. Loss was estimated at from $4,000 to $5,000. The frame office structure, located between the two neon signs advertising the attraction at the theatre, as well as the signs, were almost consumed before the deputies could reach the scene. The flames cut power lines into the drive-in disrupting the picture and blacking out the theatre. The theatre manager was quoted as saying the fire evidently started from faulty wiring in the attic of the building. The building had been remodeled only recently at a cost of $2,000.”

This opened on March 13th, 1942, as Drive-In theatre and renamed Dixie Drive-In 1949 to avoid confusion with the other two drive-ins that opened in that year.