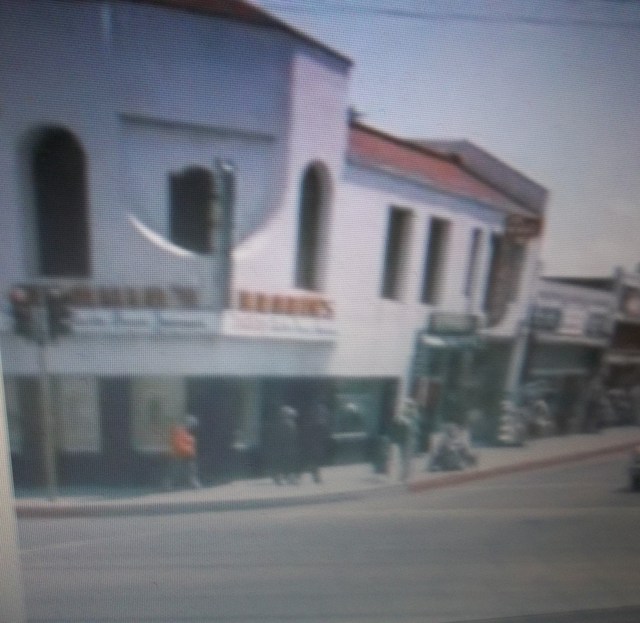 You’re talking about the bargain store on the northeast corner of Vermont and Gardena. I wouldn’t have guessed that was a theater. I will take a look inside.

Look at the Google map and go around the building. It does not look like an almost 700 seat theatre from the way it looks. Over at HistoricAerials show it there in the 1952 shot.

A couple of issues of Boxoffice in the mid-1940s mention the Gardena Theatre (it suffered a fire in 1945) operated by Harry Millstein and Harry Mellenkoff. It was most likely the unnamed theater being built for Mellenkoff that was mentioned in Southwest Builder & Contractor of October 28, 1938.

This 800-seat house was designed by architect C. E. Noerenberg, best known for designing a number of branch libraries for the City of Los Angeles, and for Dorsey High School, which he designed in partnership with Hollywood architect H. L. Gogerty.

This is the southwest corner of Gardena and Vermont, by the way. The lots on the east side of Vermont are in Los Angeles which has a different numbering system, so that’s the 800 W. block of Gardena Blvd. as it runs east from Vermont.

All sorta confusing! What’s the correct address? Is it the original building? More info and photos of the theater would help.

A Big N Save and Nexxo Financial Corp.are listed at the address in the header.

Flash News, the addresses were changed 50 plus years ago, the theater still stands, northeast corner gardena bl and vermont, i have uploaded a pic from about 1953..billy s.

I worked at the theatre from march 1955 to November 1955 that’s when it closed. That photo is not of the Gardena theater, the theater was not on Vermont it was midway between Normandie and Vermont. When it closed I think it turned into the Gardena department store. I am sending you a program that I took when I was cashier that was always in the window. I am also sending you a check stub the last one the theater issued October 22. Any other information you can email me thanks Denise Gaskell Snuffin

I talked to the other person that worked with me at the theater and I was wrong about the Gardena department store it was a few businesses to the west of the garden theater but the theater was not on Vermont it was midway between Vermont and Normandy on Gardena Boulevard.

DeniseGaskellSnuffin was right about the theater being between Vermont and Normandie, not on the corner of Vermont, though not midway between— it was much closer to Vermont. The Film Daily notice uploaded by Ron Pierce gives the location as Gardena and Berendo, which is two blocks west of Vermont.

If you take Google’s street view down the alley behind the building you can see to the left of the single rear door that the plaster is separating, in line with the top of the doorway, indicating that there could formerly have been a double exit door at that location. There is also an area at the other end of the rear which looks to have been bricked up, though it is difficult to make out due to layers of paint. That would have been the location of the second pair of rear exit doors. And again, the plaster appears to be separating in a line that would indicate the top of a doorway that has been bricked up.

So my conclusion is that the Gardena Theatre was in the building now occupied by the Gardena Department Store, 1106 W. Gardena Boulevard, just west of Berendo Avenue. That’s my story and I’m sticking to it.

Hey Joe! My name is Holly and I’m college student researching a bunch of theatres for a project. I’ve noticed you know a lot about the theatres I’m supposed to be researching. Could you contact me? I have a couple questions. My email is .