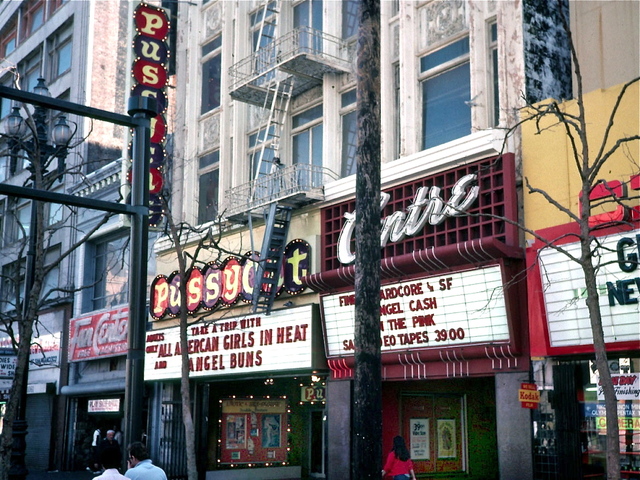 The Aztec Theatre was opened in 1925, and only operated for six months when it went back to retail use.

The Round-Up Theatre opened on February 12, 1944 with a Roy Rogers program of movies. It showed nothing but Western films, the double feature program changing daily.

On August 15, 1947 it reopened as the Centre Theatre screening Jennifer Jones in “Duel In the Sun” and began screening a mixed bag of re-releases and action films, finally zeroing in on all comedy programming beginning in 1949. A single comedy feature was showcased, backed up by a variety of short subjects, cartoons, etc., each program running an entire week.

The Centre Theatre was a classic example of the type of theatre known as a "shooting gallery," not so much from the nature of the films it showed, but from the fact that the interior consisted of one aisle down the middle with five seats on each side.

Unable to adapt to wide screen films in the 1950’s because the theatre was so narrow, the Centre Theatre landed on its feet by converting to "adult" films, first softcore, and eventually hardcore, and survived until December 1987 as an outlet for such fare.

At that time it permanently closed and was converted back to retail space (in 2018 an upmarket bicycle store).

I took care of all the projection equipment in this theatre from the time that Walnut Properties/Pussycat Theatres took it over in, as well as I can remember, about 1985 up until the time it closed. I also took care of the Guild next door for the same company. The main fuse box for this theatre, way down in the deep, dark basement was still marked “Roundup”.

In another thread (the Hitching Post in Hollywood), it was mentioned that during the Centre’s days as the Round-Up that Robert Lippman was involved in the theater. (Lippman did operate a film distribution office nearby & is best known for a lot of interesting B-films, both as a producer & as a distributor/importer.)

I think I noted on the page for the Guild (which was immediately next door to this house) that Lippert had offices, perhaps their main headquarters, in the office building above the Guild on the 4th or 5th floor. You could easily see that they had been very nice offices.

1940s newsprint add for the all western Round-Up Theater in San Francisco.

I went inside the Centre one foggy evening in the late 1970s. It had a nice lobby with gold carpet and gold drapes covering one wall, and a compact concession stand. A tall, tanned, blond, handsome doorman wore a crisp gold uniform with gold fringe epulets. He was very friendly. When entering the one isle auditorium patrons encountered a steep ramp with stadium type walls rising on either side that blocked the view of back rows. At the top of the ramp a gentle slope ran down the isle to double exit doors located below high the screen. Staight couples filled up back rows, performing all kinds of sexual activity.

I walked by the former Centre yesterday. A very nice bike shop now occupies the space. The original terrazzo floor of the theatre’s entrance is now fully on view. Brass holes for rope stanchions are still to be seen, sunk into the terrazzo. The bike shop management has the theatre’s little safe on display. Some of the terrazzo of the Guild/Pussycat next door is visible as well, though not nearly as much as what one can see at the Centre.

I worked at the Centre in the summer of ‘82. Kind of sleazy at the time. I covered the register when Dave would take breaks, mop the lobby, and change the marquee every week.
I also helped to clean up the basement. It was like a moment frozen in time, but a mess. There were classic movie posters in glass frames stacked 4 or 5 feet high, filling one room. Bogart movies and such. I got a lobby card from a marijuana propaganda film (Devil’s Harvest), which I sold on ebay for $400, and a nice War Bonds poster, signed on the back by a bunch of people who had attended a party at the theatre. I didn’t recognize any of the names, but still have the poster. One room was filled with items from a WWII era novelty or drug store. Tubes of shaving cream, polarized 3D glasses, boxes of sparklers, old girlie calendars, an Alberto Varga Esquire pin-up calendar, and other junk. There was a Victrola with a broken leg, an old Coca-Cola light-up sign, all the letters and numbers for the snack bar menu sign, etc. We had like a week to clean up before the Fire dept came. I hope someone saved some of those posters. I took home what I could carry on BART. Upstairs there was an office with what we referred to as the “casting couch” just outside. It was really a pretty cool old building, and I was lucky to have been able to see more than just the lobby and sticky-floored theatre area.

Opened as the short-lived Aztec Theatre in 1925, the twin sister Egyptian Theatre. The architects were Oliver M. Rousseau and Arthur Rousseau of Rousseau & Rousseau architectural firm.

A correction to the new bit of information appended by someone else to Tillmany’s original Overview on the Centre: The Centre was never the Aztec. It did open as the Round-Up, however.