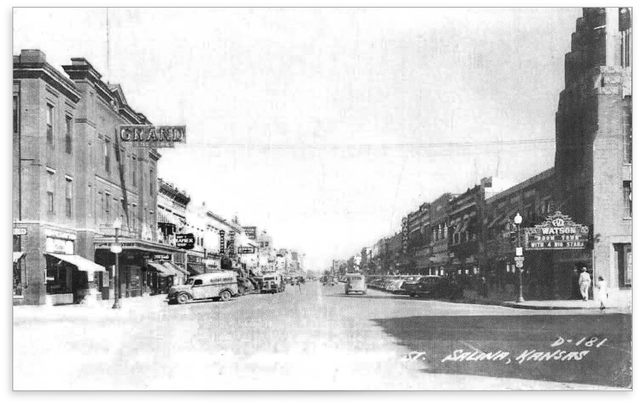 It was then reopened and was closed as a movie theatre in 1949. It was uses as a live events venue until 1953 when it finally closed. It was converted into an extension of Gamble’s store.

A biographical item about retiring Fox Midwest manager Larry Breuninger in Boxoffice of March 31, 1956, said that the circuit had bought the Jayhawk Theatre at Salina from him in early 1932.

Breuninger’s career had outlasted the theater’s. Boxoffice of January 15, 1955, said that the Jayhawk was being dismantled. The building was to be converted for business use.

From 1940 a photo postcard image that captured the Jayhawk, Grand and Watson Theaters in Salina.

Opened as the Delharco Theatre on August 19, 1929 in the Lindeham Building with the film, “Lucky Boy.” It was likely a 20-year lease. The venue relaunched just months later as the Jayhawk Theatre, February 10, 1930. Movie listings stop in November of 1949 with assorted live events into 1953. The building was sold and the neighboring Gamble’s store retrofitted the space moved doubling its store size beginning in April of 1955.