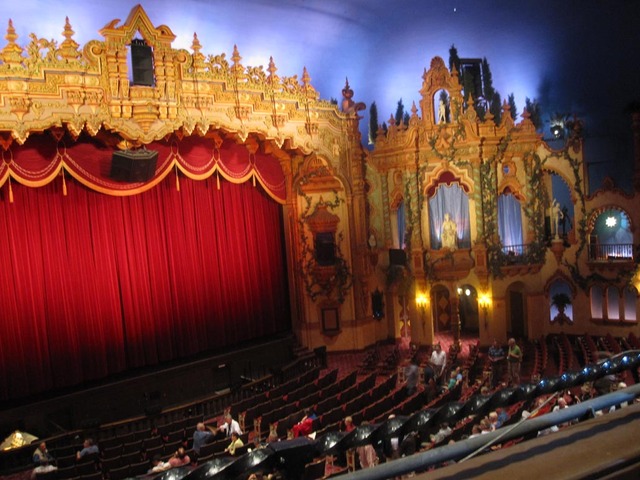 Opened as Loew’s Akron Theatre on April 20, 1929 with “The Voice of the City” on the screen and Loew’s Vaudeville on stage. The Atmospheric styled and opulent theatre was designed by architect John Eberson. Integrating Moorish and Mediterranean design, the Civic Theatre is one of the largest Atmospheric style theatres still in existence.

Restored in 2000, and still beautifully maintained, the renamed Akron Civic Theatre is the focal point of the arts community in this Ohio college town.

I didn’t get to complete my comment! Yes, DRIFTING CLOUDS!!! This was in the 1940s and 1950s! I have always wondered how they produced those clouds! One other commenter remarked about nearby restaurants. One correct spelling was Garden Grille. Correct for the other was Kaase’s, which was on Mill Street and where my aunt used to work, opposite the Colonial theater. One comment about the Colonial mentioned three steep balconies, but of three levels only two were balconies, and that second balcony really was steep! Another commenter thought downtown Akron’s Main Street was perhaps not as busy as he remembered it being…I say OH YES it was! The wide sidewalks were always full of people, both shoppers and people in between busses! All bus routes but one in Akron traversed Main Street and stopped in front of Polsky’s department store going one way, and across the street in front of 0'neil’s department store on their return trip. I know because as a young teen I used to use my mother’s weekly bus pass, ride any bus to end of line and coming back on the other side of the street I would get off and then get on next bus coming and ride it to end and back, and repeat! Other downtown theaters I did not see mentioned were Strand, Palace (had also a balcony-level entrance from High St.), and Forum. I know there was one more south of O'neil’s but don’t recall name. One other comment did mention the Orpheum which was at the north end of S. Main St. at East Market St. Someone mentioned population of I believe 200,000, but as I recall, Akron population in the busy 40s was 250,000, most of whom rode busses past all those theaters every week, except on the Crosstown route taking so many people with second jobs between Goodyear on the east side and Goodrich and Firestone on the west! One more Main St. theater was the Gaiety(sp?), but it did NOT show movies! There were probably about fifteen more neighborhood theaters in Akron at that time! I can only recall Norka, Rialto, Royal, Gem, Ellet, Highland?, Goodyear Heights?, Spicer. This has been fun to recall! Thanks for the opportunity!

Lowes was the best theater in Akron, plush carpet, very clean, classy architecture, the moving clouds…and that burgundy pop in the machine was great. I always thought the popcorn machine made better popcorn than the concession stand sold too.

We’d hit Walgreens or Mr. Peanut and stock up on reasonably priced snacks. You can’t get away with that today.

We walked there, or to other downtown theaters, from Oak Park Drive near Glendale Cemetery, every weekend.

I saw a lot of great movies at Lowes. All the “big” movies seemed to play there.

I have to take the wife there some day.

Akron’s movie theaters were a big part of my childhood up till seventh grade when we moved away.

Akronflicks: I’ve read tens of thousands of comments on Cinema Treasures over the years, and yours is the first in which anyone has mentioned burgundy pop (or soda, as we called it in California.) There was burgundy soda in the machine at the Garfield Theatre in Alhambra, California, in the late 1950s. I don’t remember it being available in any of the other dozen or so theaters I frequented in those days, nor have I seen it anywhere since.

I’m glad to hear they also had it in Akron, as I was beginning to think I’d just imagined it. Burgundy soda must have been mass produced if it appeared in both Alhambra and Akron, but I can’t find it mentioned anywhere on the Internet. It was indeed tasty, and I always especially looked forward to going to the Garfield so I could get a cup or two of it. I wonder whatever became of it?

Not only tasty, but more fizzy than what you would get at the concession stand. I was always about the fizz. That’s why I drink slightly flavored sparkling water nowadays instead of pop/soda.

It was in one of those red machines that dispensed cups. And you had to be ready to right the cup if it came down crooked.

It had a stainless steel dial that was shaped round except for the triangular shape on the right that pointed to your selection. You dialed the pop you wanted by pointing the dial at the name of three pop/soda selections. I was always ticked when it was out of burgundy and had to select something else, but you had to or risk not getting your dime, later fifteen cents, back.

Akron’s Lowes was the only place I ever saw it.

I tried to Google the machine and looked at a lot of machines, but never one that matched the one at Lowes.

The Garfield’s machines were of the ordinary push-button type. I don’t recall ever seeing one with a dial selector anywhere. But the cups still came down crooked pretty often. The Garfield’s first machine had only ordinary soft drink brands, but it proved so popular that they installed a second machine, and that was the one that had the burgundy in it.

On weekend nights the theater was still very busy in those days- at least it was after they had dropped their ninety cent top price to fifty cents for all seats- and at intermission there were usually lines for both machines. But I don’t remember them ever running out of burgundy. Most of my fellow suburbanites probably weren’t adventurous enough to even try it.

This reopened as Cinema on December 23rd, 1964. Grand opening ad in photo section.