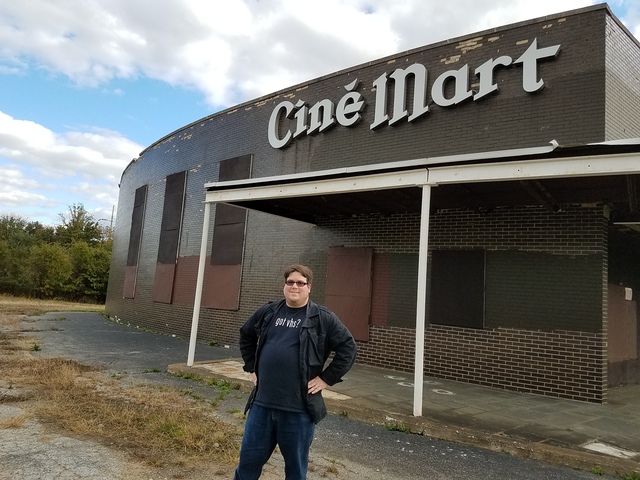 1968 was a big year for theaters in Wilmington, Delaware. The Branmar Cinema, in Branmar Shopping Center,(950 seats) and the Eric Theatre at Tri-State Mall (1,400 seats) were announced for 1969, but the biggest news was the opening of the Cine'Mart Theatre across the road from the Merchandise Mart shopping center on Governor Printz Boulevard. [boxoffice, 1/20/69 p.12]

The shopping center had been built just following WW2, and it quickly became the most popular shopping destination in Wilmington. What it didn’t have was a theatre, although the Edgemoore Theatre was just down the road. So the ABC chain decided to build their only area theater directly across the road. It would seat 1,000 people, and since roadshows were popular, be equipped for 70mm Todd-AO with Norelco projectors. The boxoffice was designed so tickets could be sold for reserved-seat attractions through an outside window.

The auditorium was completely in gold with wide rocking chair seating. The front was deeply curved to allow for the screen, with curtains that went to the rear of the auditorium. If you’ve seen pictures of theatres like the various Cooper Cinerama locations, you’ve got the idea of what it looked like!

Incidentally, in the early days the name was spelled "Cine'Mart" in the newspaper advertisements. Films like "Hello Dolly" in Todd-AO played there, and it was joined by the Eric Theatre the next year as the only two Wilmington theaters equipped for 70mm.

Apocalypse Now shown here for at least 4 months. from October 79 through January 1980.

CINEBOB? hey bob, did you see the pics i posted here of the screen? what do you think????

Is the Cinemart building still standing?

Yes john, the cinemart is still standing. Look at the pics above.. Its amazing that its in the shape its in for being closed 32 years. But it looks a wreck inside where the lobby use to be.. The screen room looks really clean inside..

Would have loved the seen “Dawn of the Dead ” with “Halloween” on this big screen which played here in May of 79. then dawn , lasted another week on a double bill with the Exorcist..

Actually both theater s “Cinemart and Edge moor” closed in fall 1980. and Midway was summer of 1976…

While on our honeymoon, I decided to take an adventure with my wife and track down the Cinemart hoping to get inside and see the remnants of the once great theater.

Sadly, we discovered that the theater now has its doors completely painted over and boarded with nails along with boards over the windows. No more access sadly.

Luckily the sign still remains up on the front.

Hey, PSMITH1983, yeah, lot of history here,, appeared to be some homeless family living in there last year or so. I quess they got tired of people going in and out so they closed every possible way in or out. It’s funny the owners of the property just leave this up as some kinda historic relic.But closed since late sept 1980!

Appears as though a homeless family was living in the upstairs stock room a few years back, then they boarded it up really good.. kinda sad.