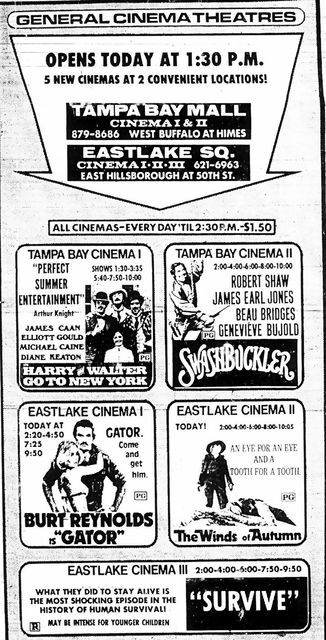 The twin cinemas were located on the main level of the two-story mall on the southwest side near Sears. These cinemas were long and narrow shoebox theatres with a seating capacity of about 350 each. The box office sat against the right wall inside the entrance with steps just beyond leading up into the lobby. The lobby was narrow and somewhat small with the concessions stand on the right as you entered. Just beyond the concessions and also on the right was the entrance to the cinemas.

This was GCC’s typical design for their theatres during this period. Blue walls, red carpeting, white lettering that spelled out "General Cinema" on the wall behind the concession stand, white pushback seats with red cushions, light-grey walls in the auditoriums and bare screens washed with blue lighting. The cinemas were always clean, well-maintained, and well-managed just as it was with other
local GCC theatres.

Cinema II received a Dolby installation around 1983. The first film I remember seeing here in Dolby was "Risky Business." Tampa Bay Mall was one of two venues in town to book "Star Wars" in 1977. The huge hit played here for months and months. Other big attractions were: "King Kong" "Tootsie" "Diner" "Barry Lyndon" "The Thing" "The Fly" "Beaches" "Cocoon" "Gremlins"
"Burnt Offerings" re-releases of "The Sound of Music" "Rear Window" and "Jaws."

Although a very popular mall destination for years, the mall began declining towards the mid-1980s with anchor tenants not renewing leases and relocating to newer malls leading to Tampa Bay Mall’s demise.

The cinemas closed on February 28, 1990 with the final features "Roger and Me" and "Stella." The mall remained open for several years and finally closed in 2002 and was demolished three years later in 2005. The Tampa Bay Buccaneer’s new headquarters and training facility now sits on a portion of the former mall site with the remainder of the land being used for parking.

Mikeoaklandpark: You’re right! I had forgotten about the video store which I visited several times. I think it was called Suncoast Videos. It occupied a good portion of the lobby. There was a door at the rear of the store and I remember looking in to see if maybe the auditoriums were still there. But it was just a small storage room with another door beyond that led down a small hallway to the exit door at the back. The entrance to the auditoriums had apparently been sealed off by a brick wall.

Yes Suncoast video was the store. Thanks Nick I was having a senior moment when I posted my comment this morning. I moved from Tampa in 1996 and can’t beleive how much it sounds like it changed. Tampa Bay mall gone, Eastlake Sq an office complex. All the movie theaters I went to are gone.

Thanks Nick and Mike.

So they opened with"HARRY and WALTER go to NEW YORK" what a disppointment for a new theatre.We played"HARRY and WALTER" for maybe two weeks to empty seats.Elliot Gould and James Caan were the stars,right off the top of my head.

Folks help me out. I haven’t been in the Tampa area in a few years. When I go to the Google Map, it shows me the entire southern half of the United States?

I did find an address of 3002 West Dr. Martin Luther King Jr. Boulevard, which is now the address for St Josephs Childrens Hospital, is that correct?

It would really be better to have an address, more info and how bout some photos?

Bob: Yes, 3002 is the correct address for St. Joseph’s Children’s Hospital which is one block east of the former mall.

The physical address wasn’t easy to find since the mall no longer exists. However, I got lucky and found a webpage with an address and aerial photo of the mall. The mall’s address was 3302 W. Dr. Martin Luther King Jr Blvd. I imagine this would also be the address for the cinemas as well.

The mall was on the southeast corner of Buffalo (Dr. Martin Luther King Jr. Blvd) and Himes Ave. Himes is the street on the left side of photo and Buffalo is at the top. Sears is the first building on the left side. The cinemas were located just outside the entrance to Sears. Here’s the link:
View link

I remember first moving into the TB area & my mom practically FORCING me to see ‘The Little Mermaid’ at this theater because of my sister’s insistance (I was already 15)…reluctant as I was, I ended up really LIKING it (eeep) & wouldn’t ya know it, Disney’s new Golden Age of animation was born with this film. The theater closed a few short months later and recall it becoming a Suncoast Video Store.

Well that just goes to show you can’t judge a book by its cover… nor a film by its title LOL!

A minor point but the theatre changed its name from the Tampa Bay Mall I & II to the Tampa Bay Center I & II beginning on April 28, 1978 to its closing in 1990. The shopping complex had dropped “mall” from its official name and the Cinema followed its lead.