Cinema On The Mall I & II

Previous Names: Cinema On The Mall 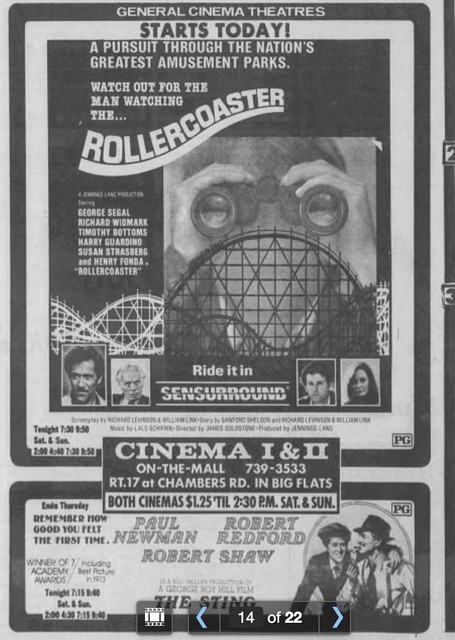 The Cinema-On-The-Mall opened on December 22, 1967 along with the rest of the shopping center, which was at the time simply called "The Mall". It was built and operated by General Cinema and featured one large auditorium with their usual "shadow-box" style screen, along with red velour-backed vinyl seats. The first film to play the theatre was Disney’s "The Jungle Book".

On June 2, 1972, the theater underwent a disastrous twinning, with a wall constructed running down the length of the auditorium. This resulted in two long, narrow theaters with very small screens. Nevertheless, the theatre played some of the biggest hits of the era, including “Jaws”, “The Exorcist”, and “Close Encounters of the Third Kind”. Eventually, complaints abut screen size caused GCC to install larger screen frames in front of the original ones.

In 1978, the newly renamed "Arnot Mall" began a major expansion, with Regal Cinemas signing a lease for a new 10 screen cinema in the second floor near the food court. Upon completion of this theatre, GCC closed their original cinema, and the space is now occupied by retail.

This theater was mentioned in my recently-posted 35th Anniversary JAWS retrospective, but I listed it as being located in Big Flats instead of Horseheads.

Was this one a Hoyts / Cinema Centers ?

Box office on the first floor, theater is on the second floor of the center court (entrance adjacent to the food court). Didn’t go in, just saw the lobby area, which made me think Hoyts.

Just to clarify some things from my original description … John is correct, the newer “replacement” theater was originally a Hoyts operation, it was they who first built the cinema on the second floor, with he box office on the first near the escalator. Regal took over after Hoyts ran into their difficulties. The original GCC Cinema On The Mall (the one that this article refers to) was on the first floor in the space that is now occupied by the Gap and the Hallmark store.

I started working at the Cinema-on-the-Mall the day after my 17th birthday in November, 1975. My first shift was a 4-hour stint making popcorn in a little closet next to the projection booth, and from that beginning I worked for General Cinema Corporation for almost 12 years, 10 of them at COTM, the last 7 as Manager (hence my login name). Even though sheâ€™s long gone I still love that old girl, so who better to tell her story?

COTM (General Cinema Corporation Unit #630) opened in December 1967 as a single-screen, 1,000-seat theater. The Arnot Mall was T-shaped and the theater and a Loblaws grocery store were the last things on the â€œbarâ€ of the T â€" a dead end at the time, but later it would play a key role in COTMâ€™s demise. A very nice old man with a heavy German accent named Fred Becker was the Manager, and my aunt, Lora Frazer, was the Assistant Manager. When I was 11 or 12 I used to go there on weekends to see movies, and sometimes I would help out behind the concession stand â€" until someone from the local Department of Labor saw me, that is.

In 1972, 90 seats were removed when the theater was twinned, creating two very long, very narrow 455-seat screens. 7 years later the first two rows of each auditorium were removed and the screens were moved up and replaced with larger screens and a mechanically-operated frame that covered the top 4 feet of the screen for widescreen pictures. Oddly, that made the viewing area of the widescreen pictures smaller than the standard pictures! But the new, 432-seat theaters, were much better for viewing movies â€" although we never did get Dolby sound.

In 1978, Arnot Realty announced that they were building an 80-store expansion at the end of the Mall where the theater was located. When it opened two years later, COTM was no longer on a dead end â€" it was smack dab in the middle of the prime retail corridor. Arnot Realty probably tried to raise our rent, but GCC had a 20-year lease and a lot of corporate power, so the rent stayed the same. But â€¦ I knew then that when the lease expired in 1987, things would not look good for the old girl.

In 1981 GCC considered building a new 6-plex on the edge of the mall parking lot. They sent a guy from Corporate to Horseheads to evaluate the market, and I personally drove him around, showing him the city and the competition. Sadly, GCC decided not to build the new theater, which ultimately opened the door for construction of the Crystal Cinema in Corning. That would turn out to be the final nail in COTMâ€™s coffin.

In 1981 the side-by-side projectors were replaced with platters, and we were supposed to be able to run the same film on both screens at the same time, but we never tried it.

For the next 6 years, not much happened. GCC knew they were going to abandon COTM when the lease expired, especially after Hoyts Cinemas announced a deal in 1986 to build a new 10-plex on the second floor of the Mall next to the food court. I managed to get them to replace the carpeting in the lobby and aisles, but that was the last major sum GCC ever put into COTM.

In November 1987, GCC turned over control of the old twin to Hoyts, who continued to operate it beyond the lease expiration until their new 10-plex was ready to open in February 1988. Hoyts moved upstairs, locked the doors for the last time, and that was it. My old girl was gone.

Two years later I was walking down the main corridor of the Arnot Mall and saw a Limited store where my theater used to be. It just felt â€¦ wrong, like I was in a parallel dimension where things werenâ€™t quite the same, werenâ€™t quite what they should have been. I live far away now and havenâ€™t been to the Arnot Mall in 7 or 8 years, but I have no doubt that if I went there tomorrow and walked past the spot where my theater used to be, Iâ€™d have exactly the same feeling.

I was doing the same thing in Augusta about that time with GCC driving some guys from Boston around town looking at new locations.I know how you feel.

I remember seeing Smokey & the Bandit here & having to sit in the front row. I had a stiff neck by the time the film was over! The Mall IS in Big Flats, but they have a Horseheads mailing address. Go figure.

This opened on December 22nd, 1967. Grand opening ad in the photo section and below