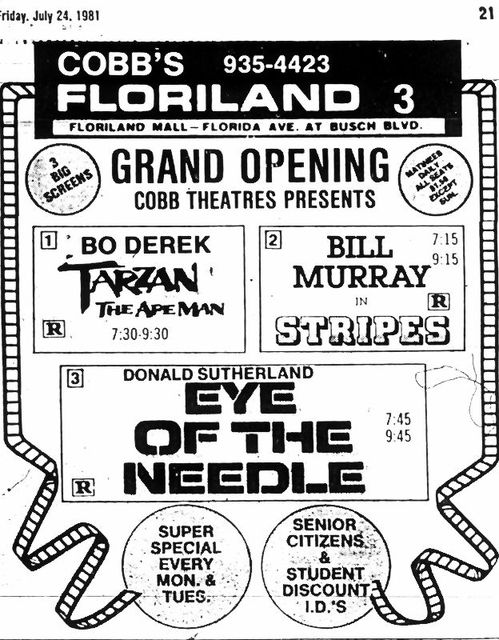 Residents of north Tampa had been clamoring for their own first-run theatre for several years since the nearest first-run houses were downtown which was miles away. Needless to say the locals were thrilled when Floriland Cinema 1 & 2 opened on November 22, 1972 as Tampa’s first twin theatre. The cinemas were built on the outside front of the already existing Floriland Mall. The mall was built on the lot of the former Floriland Drive-In Theatre which had closed in the early-1960’s.

The opening attractions were "Cabaret" and "The Valachi Papers." The cinemas were owned and operated by Budco Enterprises for the first several years and were later sold to Cobb Theatres. Years later ownership reverted back to Budco once again.

The seating capacity for the smaller cinema 1 was about 300 and the larger cinema 2 seated about 500. The lobby was designed with an indoor box office just inside the front glass doors in a small foyer. There were two entrances on the right and left sides of the box-office that led around the semi-circular concession stand and into the lobby. The joined box-office/concession stand made it easy for the cashier to simply turn around and perform double duty whenever concessions was busy.

In the hopes of attracting patrons who disliked the mini-theatre design that was becoming increasingly standard at the time, the ads for the Floriland emphatically stated: "our theatres are not mini-theatres or shoebox-theatres but full-size auditoriums with large screens!" The interior walls were a combination of red and black patterns with gold trim. Light beige curtains covered the screens which measured about 30 to 35 feet wide. Seats were standard size with red cushions.

Projection and sound was excellent in cinema 1 but there was an occasional problem with projection in cinema 2. The picture was slightly unsteady resulting in a bouncy image which was very noticeable especially during credits with white letters against a black background. This was a continuing problem that was never addressed by management. From my limited knowledge of theatre projection I’d say the culprit was probably an improperly adjusted film pressure plate or film guide or possibly wear within the intermittent mechanism.

I treated an operator friend and his wife to "The Rose" when the film opened here. In appreciation he took me up to visit the booth before the film began since he knew the operator working the Floriland that evening. While they chatted I walked around the booth taking in every detail. Projection was the platter set-up. I walked over to the projector at cinema 2 which was projecting Disney’s "The Black Hole" on the screen below. In my state of awe I had totally forgotten about the unsteady image problem or I would’ve mentioned it. When it was nearing time for "The Rose" to began we thanked the operator and headed back downstairs and into cinema 1 just before "The Rose" began.

Among the many films I saw here over the years:

Cobb Theatres took over ownership in mid-1981 and a 3rd screen was added by dividing cinema 2 in half. The Floriland’s last day as a twin was July 12, 1981 and the last film to play in cinema 2 on the big screen was "Clash of the Titans." During the errection of the wall in cinema 2 which took a mere 12 days to complete, the theatre remained open with "Stripes" playing in cinema 1.

On July 24, 1981 the cinemas reopened as Cobb’s Floriland 3. The new cinemas 2 & 3 now had new but much smaller screens. The reopening features were: "Tarzan The Ape Man" "Stripes" and "Eye of the Needle." I saw "Eye of the Needle" on opening night and it was super crowded with shoulder-to-shoulder people trying to make their way from the lobby through the narrow foyer at the rear of the auditorium and into the small cinema 3. I overheard one man tell his female companion, "This is ridiculous! Don’t rush–if we can’t find seats we’re asking for a refund!" Aside from "Eye of the Needle" I recall only seeing two or three other films in the small twins: "Lost in America" "Monty Python’s The Meaning of Life" and "Ghost Story"

A short time before closing Budco took over ownership once again. The last day of operation was August 31, 1986 with the final features:
"Armed and Dangerous" "One Crazy Summer" and "The Great Mouse Detective." Most of the tenants of the small Floriland Mall had left when their lease expired and for a time the mall became totally deserted.

The Floriland Cinema building remained closed for some time. When the mall later reopened as an indoor flea market the wall separating the cinemas from the mall was torn down opening up the now empty auditoriums to the mall. I recall a couple of jewelry or knick-knack shops that moved into the lobby of the cinema. The empty auditoriums were used as a walkway from the mall to the doors at the front.

The only hint remaining to indicate the space was once a cinema was one side wall in each auditorium that still contained the red and black paneling, and the booth with portholes was still there. Yes, I did go up to check out the booth and the only thing remaining was part of a rewind table that had been moved to a corner outside the booth door.

The flea market eventually closed and the mall was purchased by the City of Tampa and completely remade into a city government office complex. It currently has the traffic court, the unemployment office, drivers license renewal center, and tax collectors office. The cinema was completely gutted and rebuilt as a branch of the tax collector’s office. I visited the tax collector’s office several years ago and you’d never even suspect it was the former Floriland Cinemas.

Nick.Don’t have any idea you will see this but I am sending another Drive-in Ad from the Tower Drive-in back for you to put on CT.

Nick
They used the big theater on the left which might have been 3 not 1 for the shows. That theater had the stage which had a huge screen when it was a movie theater. Thank you for adding Nancy Kulp’s name to the postings. Since I posted my comment in June I coul dnot remember her name. Major senior moment. LOL

Mike, It’s been awhile but I’m finally back on CT. I know what you mean about senior moments since I have at least two every day!

The tax collector’s office in the former Floriland Cinema building may not remain open very much longer. Due to budget cuts most of the government offices located in the former mall have shut down. I’m guessing it’s only a matter of time. Then who knows what the building will house next.

Budco’s theatres in the Philadelphia region, where they had a major share of the market, was bought out by AMC in 1986, Know anything if this ever made it to the AMC circuit before it closed?

Rivest266, Floriland never became an AMC theatre. It opened under Budco and was later purchased by Cobb who added a third screen. Sometime before closing it again became a Budco theatre although not for very long. When it finally closed as a movie house it became a dinner theatre for a short while and was later absorbed into the Floriland Indoor Flea Market.

this was the theatre I frequented while living in Tampa as a teenager, I went to nearby Chamberlain H.S. sOME OF THE LAST FILMS i SAW THERE WERE “E.T. the Extraterrestrial” and “Poltergeist” in 83'. I also went to the old UA Mission Bell 8, and Northdale Court Cinemas before eventually going to work in theatres myself.

Rarely went to this theater as it was on the other side of town. Two films I recall seeing there were the Cotton Club (1985) and Octopussy (1983).

reuploaded Nick’s ad without scratches and all in one piece