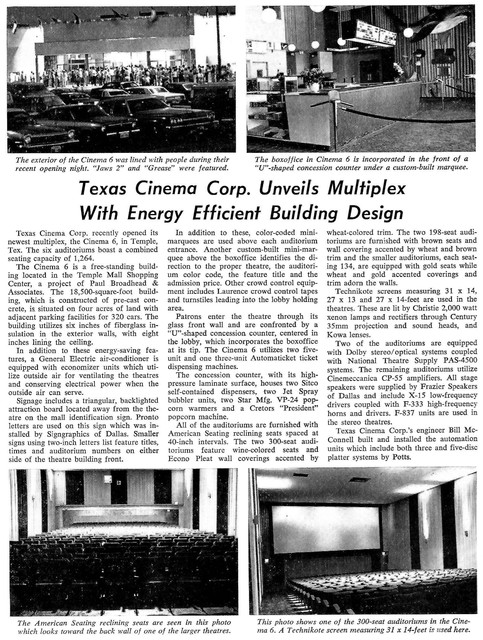 Temple, Texas is a quite town, but when the churches and local politicans get involved with what is on the screen watch out! The past history of this little six plex is interesting because it came across a little problem back in December 1983.

B.A. Bengtsson a veteran of the theatre business told locals that have constantly been critical of what he is playing. They want more G-rated movies. Bengtsson said the locals want a "Golden Seal" that requires G and PG movies only! Berngtsson said "In this Business petitions don’t talk, theatre tickets do."

The Cinema 6 continued its regular fare of films, understanding that folks have reason to complain about Hollywood trash, but send a signal by supporting a G or PG picture, which in time the whole organization of "The Golden Seal" fell apart and most likely one or two of the organizers was most likely watching "Gorky Park" which was R rated and played the Cinema 6!

I wonder where B.A.Bengtsson is today.Seems like the kind of guy I would like to work with!

Hope someone can answer this!

I bet in a town that size its the same theatres.

Toward the end of its life this theater was nasty. Sticky floors, sagging wall curtains, etc.

The also used to be a Cinema 5 a little farther south on S. 31st Street. It was a couple of years newer than Cinema 6 and closed at about the same time.

I spent the majority of my youth at this theater (Cinema 6), as well as its sister theater just a mile or so down the road, called simply Cinema 5 (which does not seem to have a listing here on the site) Those two theaters are vividly burned into my memory and I had to write this up so that there is some sort of record that they existed. Cinema 6 was Temple’s first multiplex, opening (I believe) in the summer of 1978—the summer after “Star Wars” exploded and changed the movie theater business model for good. C6’s arrival effectively killed off Temple’s two old-school historic 1-screen houses located downtown: The Arcadia (which was still showing 1st-run movies after 50 years—it’s where I saw “Star Wars” and “The Rescuers” in 1977) and The Texas (which was either closed or had fallen into projecting “disreputable” fare). Bought and sold off by various chains over its 24-year lifespan (including Plitt and Cineplex-Odeon), Cinema 6 was located in a stand-alone building behind the Temple Mall (the mall itself is still in operation and, in fact, is the exact same building 40 years later, renovated several times inside). The theater’s ghostly parking lot is still intact, though most of the area where the actual theater stood is now a road running next to a Wal-Mart (planted, years later, in what used to be a vacant field) and also a little bit of Wal-Mart’s parking lot. This means, on trips to Wal-Mart, I often find myself driving directly over the grave of my old stomping grounds …driving my car over the exact places where I sat down and saw everything from “Raiders Of The Lost Ark” to “E.T.” to “Ghostbusters” …driving over old memories and the echoes of my former self (weird!!).

Unfortunately, no one ever thinks to take photos of your local movie theater—I wish I had—so, now, I can only describe the place from memory. The theater was flanked, on the far left and right sides, by its two biggest auditoriums, with a medium-sized screen nestled next to each of those, followed by a small house on each side. The right and left sides of the theater were identical—3 screens each, staggered inward towards the back and center—separated by a decently-sized concession area that ate up most of the lobby (both boy & girl restrooms hiding behind concessions on either side, right next to the entrance to the smaller auditoriums in the far back center). 4 of the 6 auditoriums were equipped for stereo, leaving 2 as plain old mono (I’m not sure if this was the case when it opened in 1978, or if it was upgraded along the way—I only started paying attention to such things in the mid-80’s and was always disappointed to end up in 1 of the 2 mono houses). To paint a totally specific picture, facing the theater from the parking lot, from left to right: Large house (stereo), Medium house (mono), Small house (mono), Concessions and Restrooms, Small (stereo), Medium (stereo), Large (stereo). To enter the two largest houses, you’d travel down a little darkened hallway, decorated with framed posters for coming attractions—a big deal for a movie poster nerd like myself (there were also posters on the walls of the lobby and a couple nestled as a surprise around the corner when you visited the bathrooms). Once the city realized it could support more than 6 screens, Cinema 5 was born, December of 1983, just a mile-or-so down the very same road (31st Street, directly in front of the old abandoned 3-screen Showtime Drive-In). Cinema 5 offered up, on its left side, 1 small (stereo), 1 large (stereo) and 1 medium-sized (mono) house, with 1 additional large (mono) and small (mono) house on its right side, each half separated by a long and narrow concession area (restrooms on either side, with a much smaller lobby area than Cinema 6) that prevented the general public from skipping over to the other side (unless you were sneaky). 5 had arcade games and posters on each lobby side, with 5 ‘now-playing’ poster lightboxes on the building outside (I don’t ever remember 6 having a poster lightbox, just a small lightboard that stood near the sidewalk, on the walk up to the ticket counter, that listed the movies and showtimes like a drive-thru menu—always missing a letter or two).

My dad and I spent countless hours at these 2 theaters, seeing 2-3 movies a week. Then, in the summer of 1985, we fell in love with a couple of THX-certified theaters in Austin (the Arbor and the Lincoln—oh, my heart) and, increasingly spoiled, started making weekly trips to go see movies there instead, slowly but surely abandoning poor old Cinemas 6 & 5. By the early 90’s, I was barely seeing anything in town anymore, as the theaters were already running deep into neglect (musty curtains, sticky floors, dark projection, broken seats, mono prints for stereo houses, etc)—they only degraded further during the 90’s (or so I’m told). Because the end was drawing nigh, I saw one last movie, out of basic curiosity, at Cinema 6 in early 2001—the place was gone less than 1 year later, leaving Cinema 5 as Temple’s only theater for about 10 months or so. Thanksgiving of 2002 brought us our first modern theater, the Premiere 12 (now 16) inside of Temple Mall, which ended Cinema 5 immediately (I also saw one last movie there, out of curiosity, in its final week). Hey, there weren’t movie palaces or anything, but, honestly, pretty good for a city our size (at least until they fell to literal pieces). Hard to believe that, since the birth of cinema, a moderate-sized city like Temple has only had 6 indoor theaters (and 4 drive-ins)—2 of which exist today: the previously mentioned Premiere 16 inside the mall (birthed in 2002, renovated to add an IMAX screen in 2014) and a 12-screen Cinemark, complete with an XD house, in 2013 (renovated to add recliner seats just last year).

Sorry to drone on and on, you caught me in a nostalgic kind of mood.

A page has been added for Cinema 5.