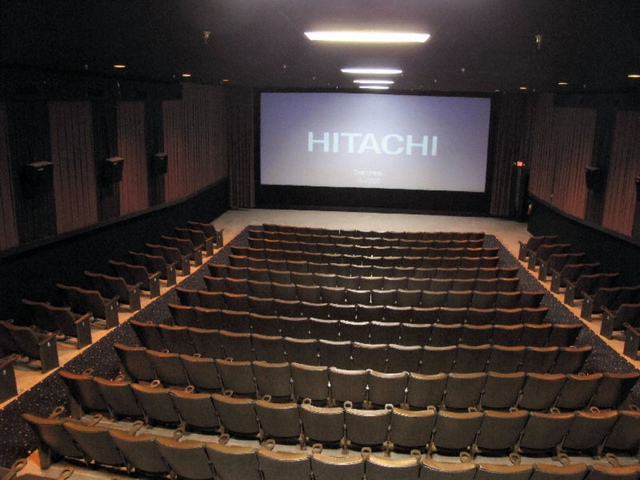 Opened in 1983, the Covington Square 8 Cinemas was a Litchfield theatre out of South Carolina. At one time, Litchfield owned 38 screens in Atlanta. The new cinemas ranged from 150 to 350 seats.

There was state of the art projection equipment and water fall curtains in every theatre, something at the time Litchfield was very big with new theatres.

The Covington Square 8 Cinemas was closed in 1997.

This is a newly renovated old school theater. This means that it is now sanitary and has the movie equipment to offer better quality viewing experience. It does not have stadium seating or all the other big stuff but it does have 4.50 matinees!!! Yes! They also host a lot of free community events.

Torch Theaters have given new life to the old cinemas in the Covington Square shopping center in Lithonia.

The San Antonio, Texas-based company poured $1 million into renovating the eight-screen cinemas at the intersection of Panola Road and Covington Highway.

Tony Overpeck, the company’s CEO, said the overhaul was important to provide a comfortable experience for the patrons he is trying to lure back.

Overpeck, who started as an usher at a Loews cinema in Indianapolis 20 years ago, said he worked his way up to manager and then to the corporate level. Over the years, he worked for six large companies before owning his own theaters.

The Lithonia cinemas, which first opened in 1983, have operated as Spotlight Theaters and Regal Cinemas. Lee May Enterprises last operated them as Cinefe, which closed last December.

Overpeck, who also runs The Main Place cinemas in Dallas, says the Lithonia theater is the first under his newly launched Torch Theaters brand.

He hired T.J. Jarrell from Trademark Cinemas in Savannah to manage it because he is a former Stone Mountain resident who “thinks outside the box.”

Jarrell says the theater will be a fun place for the neighborhood offering reasonable prices.

“When you come through the doors we will treat you like guests in our house,” he said. “My door will always be open.”

Tickets for first-run movies before 6 p.m. are $5.75 for everyone and patrons buys tickets and snacks at one stop at the concession counter instead of waiting in two lines.

Overpeck says his cinemas strive to be part of the communities where they operate by hosting events of interest to them.

“I imagine that there will be high interest in these events,” he said.

Overpeck says they are also reaching out to day-care centers and schools to let them know that if they are reading a book and there is a movie about it, that they can show it for the children. He also wants to host film festivals.

He is also offering auditoriums for business meetings and family reunions weekdays when they are not showing movies. He said they can show PowerPoint presentations and DVDs on the big screens.

“There is a lot of usage for this space and we can customize it,” he said, “and cater everything from coffee and donuts to setting up a carving station.”

Legacy Entertainment, operators of this theater and the Coral Square Stadium 8 in Coral Springs, Florida, has a web site.

Frank Theatres in nearby Lithonia has closed.

A handwritten sign on the glass entrance doors reads: “No longer in business. Thanks for your patronage.” There is a sad face drawn on the note. The theater, located at 2244 Panola Rd., has been through several changes over the years. Before it was Frank Theaters, it was Legacy Covington Square 8.

In late November, two theater employees were robbed at gunpoint at the theater, where the suspect took between $1,500 and $2,000 in cash

The Movie Theater is an 8 cinema theater with a total of 1,600 + seats. The theater has had a several hundred thousand dollar makeover. The property includes 8 projectors. All equipment in the space goes with the property

Listings started on September 29th, 1989. Unable to find anything before for this cinema.