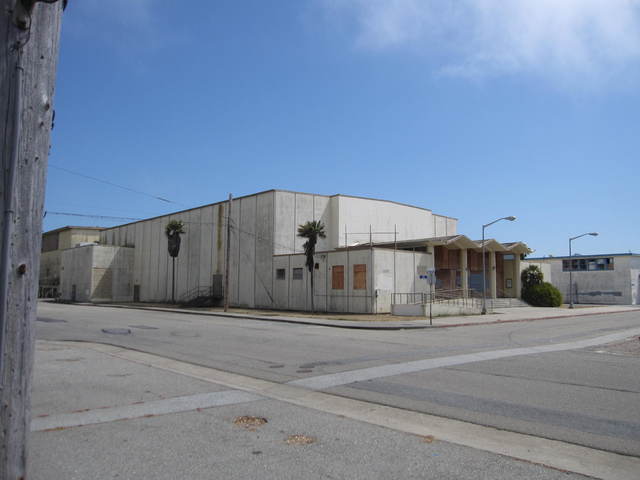 Located on Treasure Island, this theater served personnel assigned to the Treasure Island Naval Base. It was named for WW II hero and Medal of Honor awardee USMC Sgt. John Basilone. Judging by the architecture, it probably was built in the late-1950’s or 1960’s, and closed when the base was decommissioned in the mid-1990’s.

Some pictures of the abandoned Basilone Theater:

As a ‘Public afairs’ Navy Reservist at T.I. in the late 70’s-80’s I often saw a good flick at the Basilone Theater.

I was proudly associated with the 45th Anniversary program about Treasure Island and made some 8'x10' b&w copies of stage and projection equipment from historic photos. These also included the California Building fire at the 1939 World’s Fair. I was informed that a pipe organ was destroyed inside.

The theater building is still there as of the end of 2011, but its condition doesn’t appear that great. The map address can be refined to 9th St and Ave I: http://g.co/maps/q48z9

I attended this theater when I was in the Navy. I was there in the fall on 1964. The interior was nothing great, but it had a very large wide screen. Great presentations of CinemaScope films.

Currently (1/17/22) in the process of being demolished. I was there yesterday and they have the whole thing wrapped in plastic, covered in asbestos warnings, as they tear it apart from the inside out.

Added to Photos - an image capture from Google maps from June 2021.