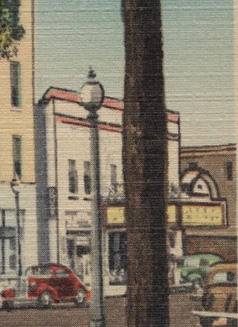 Oops! Here is the Smalley’s ad from 1950 for Roy Rogers' Sunset in the West movie.

Nice ad for Sunset in the West,Thanks Don.

There were two houses called the Smalley Theatre on this site. Something apparently happened to the first one in the early 1930s, and it was replaced by a new building. Here’s an item from the May 16, 1932, issue of The Film Daily:

:“Norwich, N. Y. — A 900-seat house on the site of the former Smalley theater here is planned by William C. Smalley, head of the Smalley Chain Theaters, Inc. Victor A. Rigaumont is the architect and the house, designed in the French Riviera style of architecture, will have a stage and orchestra pit.”

Don’t ask me what the “French Riviera style of architecture” is. I have no idea.

Judging from the photos in the Boxoffice article Tinseltoes linked to it looks like “French Riviera Style of architecture” means atmospheric with a bit of Mediterranean tile and some potted plants.

I did a lot of research on central New York theatres in the late ‘70s. I was a kid then, so I can’t vouch for this information, but I will tell you what I remember about this theatre:

Correction to the above: 23 EAST Main Street, not West. And looking at it again from a different angle on google maps, I’m pretty sure this was the extensively remodeled building I was told once housed the theatre.

Original Smalley’s burned down “last spring” according to a November 1932 article in a movie trade.

There were two other theaters in Norwich at one point besides the three listed here; the Bijou and the Happy Hour (which was at least open 1915-17). I haven’t found much more information on them so far. I wonder if one of them turned into the original Smalley’s.

Comment on the Colonia Theater thread indicates the Bijou building still stands and a picture of it exists – I’ve been so far unable to find that or more information. I wonder if that poster could do an entry for the Bijou (which apparently did not turn into Smalley’s, since the building still exists).

A 1918 Norwich directory lists the Happy Hour Theatre at 22 S. Broad Street. The only other theater listed is the Colonia, so the Bijou must have been closed by then, and Smalley’s not yet built.

There is a possibility, which I have not yet been able to confirm, that the original Smalley’s Theatre was built in 1919 or 1920, and was originally operated by the operator of the Happy Hour Theatre, possibly under the name Strand Theatre. This is an extract from an item in The Moving Picture World of May 3, 1919:

“Dr. W. E. Hartigan’s residence on East Main street is being razed, and it is understood that C. H. Latham will build a modern photoplay house on the site.

“Mr. Latham, on being questioned as to his plans, said he was not ready to give out any news, but that he would make a public statement later. The rumor has been going for some time that there would be another moving picture theatre in Norwich. The new house will have conveniences for vaudeville.”The June 23, 1919, issue of The American Contractor also mentions the project:

The name “Happy House Theatre” is most likely a mistake, as the 1918 directory lists A. E. Ford as proprietor of the Happy Hour Theatre. An issue of the Chenango Union, Norwich’s local newspaper, from either 1919 or 1920 (the date is not on the page I have access to) advertises the Strand Theatre, A. E. Ford manager. The only other theater advertised is the Colonia, so it is possible that Mr. Ford closed the Happy Hour when he opened the Strand.

The Strand is listed at 19 E. Main in the 1922 Directory. If the Strand became Smalley’s then the address might have been shifted at the time the original theater was replaced in 1932. Still, the possibility that the Strand became Smalley’s remains moot, considering the fact that the May 3, 1924, issue of The Moving Picture World mentions “[t]he three exhibitors….” in Norwich. It doesn’t name the three theaters, so it remains uncertain if the third theater at that time was Smalley’s, or perhaps the Happy Hour had been reopened. It is possible that the original Smalley’s was next door to the Strand and built sometime between 1922 and 1924.

The November 10, 1932, issue of The New York State Exhibitor said that Smalley’s Theatre in Norwich was scheduled to open that day. The subsequent issue of the semi-monthly journal, November 25, said that Smalley’s had been opened, though it didn’t confirm that the event had taken place on schedule.