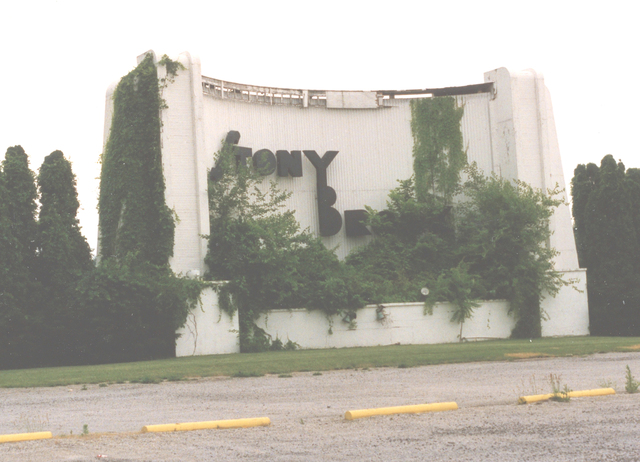 The Stony Brook Drive-In was located along the once-famous Lincoln Highway in East York, Pennsylvania. Opened on October 5, 1949 with June Haver in “Scudda-Hoo”, Scudda-Hay!“. It survived for many years operated by Budco, who were taken over by AMC who closed the Stony Brook Drive-In on September 13, 1987 with Peter Weller in "Robo-Cop” & Louise Smith in “Working Girls”. After it closed, I remember walking in and shooting a lot of photographs.

The property was intact but overgrown. The wide screen remained, as did most of the buildings with some old speakers lying around.

My impression was that this had been an emphatically no-frills operation. Most of the buildings were very basic and most seemed to be constructed mostly of wood. (Everything seemed almost 1940’s, or maybe 1930’s, like an old amusement park).

There was a rather garish attempt at color coordination, in primary greens and garish red-oranges that stood out glaringly against the natural greens of the undergrowth.

There was a playground to the rear of the grounds.

There was large structure, made of corrugated metal and almost as big as some drive-in screens, that provided an impressive entrance. Large, stylish black lettering verified that the name was Stony Brook, not ‘Stoneybrook’ as it sometimes cited.

I also remember Playland, a swimming pool and miniature golf course complex down the road (towards York) in this same area. The pool was unique as it built out of the ground (like a huge bowl) and there were observation windows through which you could see people swimming underwater. A trip to Playland and a movie that evening at the Stony Brook Drive-In was a special treat.

According to a website the Stony Brook Drive-In was demolished in 2004, several years after I left Pennsylvania.

John S: Now that you mention it I think there was a roller rink at Playland. If you faced the property from the highway the miniature golf course and pool were on the left, and the rink was to the right. I think you drove in between them.

The golf course was right in front of the pool which, as I said, was uniquely elevated and shaped like a kind of oval or horseshoe-shaped bowl. Behind the pool there were grounds, mostly grassy lawn, for sunbathing.

There were large paintings of sea creatures on the bottom of the pool and there was a large slide to the right, a smaller children’s one on the left side.

I thought the whole complex was magical, the underwater windows on the dive area were fascinating.

Aside from Hershey Park, Playland was the closest you could come to Disneyland in Pennsylvania. I always looked forward to our trips down from Harrisburg.

The Comet Drive In Theatre was located exactly where the Crystal Springs bottled water plant is right off of 283. Back when the Comet Theatre opened, Route 283 was known as Route 230 and was not a limited access road. You could enter and exit the drive in right onto the four lane highway. At the end of the showings, they had police there to direct traffic out of the drive in and to stop traffic on Route 230. Back then route 230 ended at what is now the first exit for Mt. Joy. It was only after the rest of Route 230 was constructed to the Dauphin county line that they changed it to Rte 283 and made in a limited access road. The Comet lasted for a few years after they had to construct the new entrance drive which is used now for the bottled water plant. When the drive in was first dismantled, the building built was for a large tracter trailer and tanker truck showroom and repair facility. I think that was short lived and eventually replaced with what is there now. Both the Comet Drive In and Sky Vue Drive in (Route 30 East where The Tanger Outlet center is now located.) were owned and operated by the Chertcoff Theatre chain, which built and operated the King Theatre in Lancaster City along with other theatres all over the Central Pa area. I know when the Comet was first proposed, most people thought it was a stupid location right across the road from the main line of the Penna. Railroad where passenger trains would speed passed either heading East or West about every 30 minutes or so. I remember watching a movie at the drive in and hearing the train horn in the background. The Comet Drive in was a much more elaborate theatre than the Sky Vue as it was built later. Both had playgrounds in front of the screen. If you go to the rear parking lot of the Tanger Outlet Center you can still see light poles standing that were used at the Sky Vue Drive in. You entered the drive at about where the outlet entrance is now. It was a long drive and the screen was to your right with the back of the screen facing West towards Lancaster City. Those were the days. Both drive ins at times played first run movies. I remember seeing “The Carpetbaggers” at the Sky Vue Drive in. I cannot remember whether it was also showing at one of the movie palaces downtown or just the drive in. Back then in Lancaster anyway, a movie generally only played in one location and an engagement could last for 6 or 8 weeks. Well, I rattled on long enough. John S and John Messick, we still need to get together to have a rehash old times and awaken old memories gab fest session. Are you two still interest??

Wish I could join you too, but I’m in California. I remember seeing GODZILLA VS THE SMOG MONSTER at the Comet. It had a neat sign at the entrance too.

PS: DennisZ: Great entry. Break your comments into paragraphs & they would make a good entry on the Comet &/or the Sky Vue….

Also hoping to get some more comments on the Lancaster downtown theaters…
I have not been able to find any photos of the Boyd and other theaters.

thanks for the pics penway14, i’ll try and take some pics of what the land looks like now 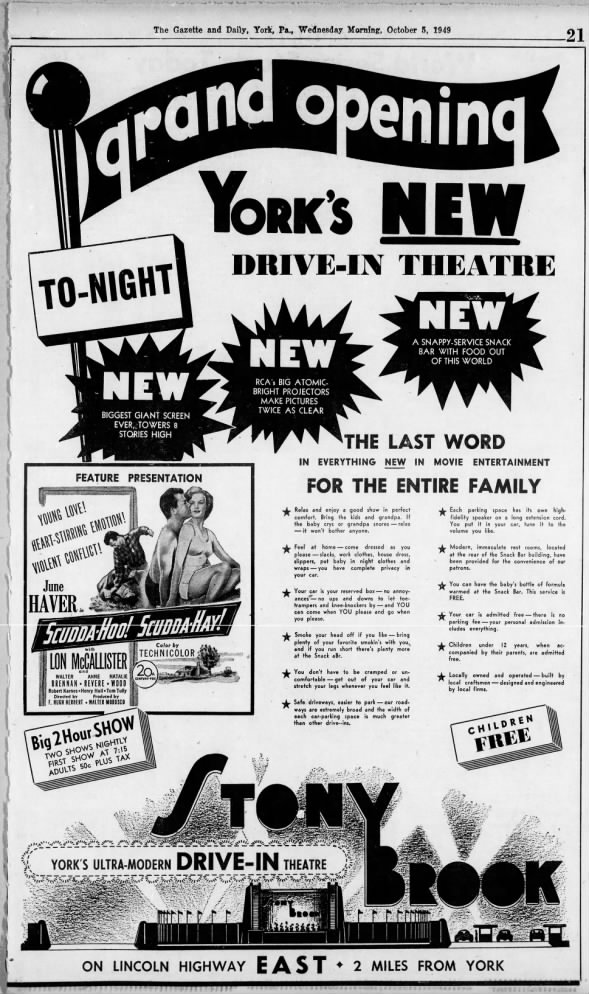 Closed September 13, 1987 after showings of “Robo-Cop” paired with “Working Girl.”