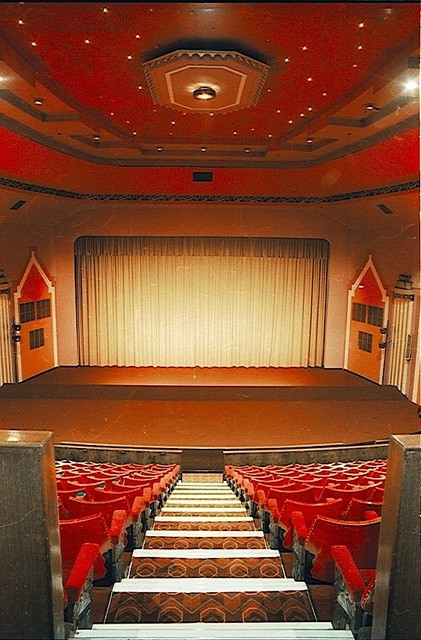 One of seven Paramount Theatre’s built by the American owned Paramount Theatres Ltd., in cities in the United Kingdom (the others were in Birmingham which is still open as Odeon), Manchester, Glasgow and Leeds which have now closed and Liverpool & London’s Tottenham Court Road, which have been demolished).

The Paramount Theatre, Newcastle upon Tyne opened September 7, 1931 with Jack Buchanan & Jeanette MacDonald in “Monte Carlo”, and a stage presentation by Francis A, Mangan “The Ladder of Roses”. The Paramount Theatre was a large and lavish addition to the city’s cinema scene. Designed by Frank T. Verity and Samuel Beverley, it has a strong similarity to the Paramount Theatre at Aurora, Illinois - Charles M. Fox is believed to have been the interior designer of both.

Opulent in the extreme, the decor included "pilasters which flower into glass illumination fittings", silk panels, over 500 motives and paintings applied directly to the walls over a two month period, sequin-spangled drapery, and a series of statues.

There was a full (and frequently used) 30ft deep stage behind the 54ft proscenium. A Wurlitzer 3Manual/19Ranks theatre organ on a lift rose up to the left of the stage. In the basement was a restaurant.

The 6-storey exterior was finished largely in brick dressed with Portland stone. A fancy, American style marquee ran across the width of the Pilgrim Street frontage with a vast vertical "Paramount" sign in the centre of the building the height of three floors.

On November 27, 1939 all the Paramount theatres were sold to Odeon and the Newcastle Paramount was renamed Odeon on 22nd April 1940. Stars who appeared in shows at the theatre include, Billy Cotton & His Band, Joe Loss & His Orchestra, George Robey, Anna Neagle, Al Bowlly and George Formbey.

CinemaScope was fitted in 1954 prior to "The Robe" - the auditorium was modernized and the decor simplified but much of the original still remained. Ten years later the Wurlitzer organ was removed. In the 1970’s pop concerts features The Whoi, The Rolling Stones and Rod Stewart.

Good years followed - the cinema survived an AMC multiplex opening in 1987 and a major refurbishment was carried out (costing £750,000).

In 1999 the Odeon was Grade II Listed with English Heritage stating "[it is] The best surviving Paramount cinema in Britain, with well composed facade and rich interior with Lalique glass fittings"

In 2001 Odeon Theatres Ltd. decided to build a new multiplex in the city centre and successfully applied to have the cinema de-Listed to maximise its site value for redevelopment.

It closed in 2002 and stood empty and unused. Demolition began in December 2016 and was expected to to take 46 weeks. At 11pm on the evening of 3rd April 2017 while demolition work was underway, the entire front of the building collapsed into the street. Luckily no one was injured or killed, but the bus shelter on the pavement outside the Odeon was crushed and totally demolished. Demolition of the former cinema recommenced in early-May 2017.

I worked at this theatre from 1975 till closure, and news recently about its impending demolition is very sad, We`ve experienced some great premieres, special screenings, visits by celebrities etc… what a pity to lose such a historic building…

Photo uploaded. I made a rare excursion into Newcastle today and fully expected to see the scaffolding already up. So far, however, nothing seems to have taken place – at least on the outside. I guess that inside the usual asbestos stripping etc must be in progress.

What a pity that the Paramount/Odeon was not considered worthy of restoration as it would have made a fine multi purpose auditorium (there is sufficient space at the rear to deepen the stage). It would have been far superior to the barren looking City Hall and the ‘slugs on the riverbank’ known as The Sage…..

On the News today that the frontage collapsed in the street….

it was on the local news here but I didn’t know it was on National :–

I’ve collected some photos of the Odeon, which may be of interest at: https://co-curate.ncl.ac.uk/odeon-cinema-pilgrim-street-newcastle/

I remember seeing the first Star Wars movie at the Odeon, when I came to Newcastle as a student. The closed cinema has been a depressing site for years now. The listing and then de-listing of the building is interesting and shows the tensions that can arise between heritage and redevelopment!

A former Odeon employee told me a few interesting things about the theatre’s de-listing but to name names and to repeat what I was told might prove libellous…….

To clear up a misconception, the circle at the Odeon was never extended forward. When the tripling was done the roof of the minis protruded in front of the circle. When the fourth screen was added, a floor was built from the roof of the minis forward to the original proscenium and the screen raised to sit on this with a new false proscenium around it. The fourth screen was in the old front stalls area, which had retained seats after the original tripling. The original circle seating area remained as built through all these changes. How all this work raising the screen to it’s new position was done without Odeon 1 closing is puzzling, but my records indicate that it never closed.

From memory, during the conversion to four screens, Sc1 had a temporary screen & frame erected in front of the old proscenium to enable films to be shown during the work going on behind…. 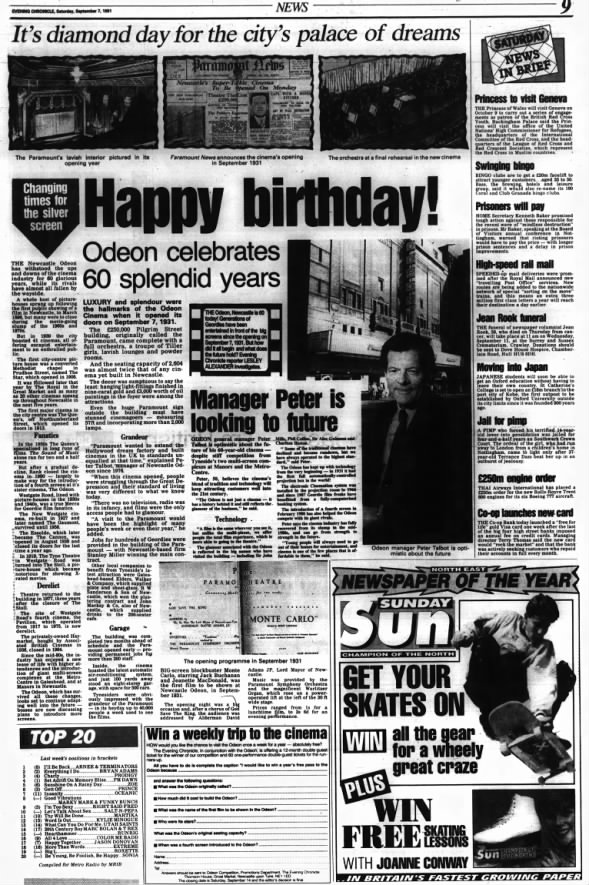 I was the one who organised the paper coverage.. as nothing would have been done to celebrate this milestone…. such a shame the great building herself is`nt still around…