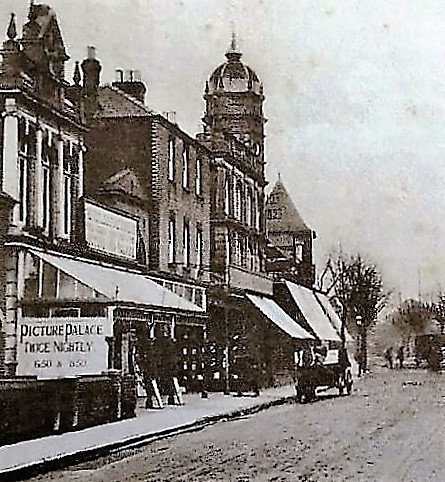 A project commenced in 1910 to build a picture house on a piece of vacant ground between the rear of Bakers store on the corner of Leigh Road and Mrs Godwin’s premises at 1 Market Street. This opened on 15th January 1911 as the Picture Palace ‘the first purpose built cinema in the area’ predating Southampton’s Atherley Cinema by 22 months.

Although primarily a cinema, the Picture Palace started to include variety acts as part of the programme until they became dominant. This was scaled back shortly after the opening of the Variety Theatre when film resumed as the mainstay of the public’s entertainment.

The Picture Palace was always busy, so much so that in 1913 the owners and manager were taken to court for breach of safety regulations ‘with all seats full, the overspill filled the aisles and gangways obstructing the exits’.

At the time of opening in 1911 much of the population of Eastleigh had earlier opportunities to see film, if not by travelling to Southampton, then certainly at one of the many touring Bioscopes that frequented the fairground site in Market Street. In Southampton the main theatres often showed film as part of their variety programmes. In fact the Philharmonic Hall (later the Alexandra Cinema and the site of the original Odeon Above Bar) showed their first film in 1896, whilst the Grand Theatre began showing films in 1902 and the Palace and Hippodrome in 1908. Also, in 1908 the Empire Theatre in Bugle Street became Southampton’s first cinema. In 1910, the Electric Cinema opened in Shirley in a converted hall. So, the 1911 opening of the Picture Palace was something of an event for Eastleigh, the first purpose built hall.

There were many interesting film programmes at the Picture Palace besides the regular fare. An example is in the first week of November in 1916, when at the beginning of the week “The Battle Of The Somme” was screened (The official record of the great advance. Photographed on the actual field of battle), whilst from Thursday of that week the film of ‘Jess Willard v Jack Johnson’ was shown (The greatest film fight yet produced ‘The world heavy-weight championship for £10,000’ see the famous knock-out in the 26th round).

On August 1st 1921 the venue was sold to George Wright, who renamed it Picture House. George Wright was born in 1895, was elected to Eastleigh Council in 1927, and became an Alderman in the early-1930’s; he would become Mayor in 1944-45. He had previously managed the Variety Theatre from 1916 through 1918 during which time he had changed the bill from mainly variety to pictures. Since then he had managed the Palladium Cinema in Portswood, Southampton.

Extensive interior decorations were carried out with panelling in oak and blue hung with art paintings in the style of Louis XIII period. At the time technical improvements were made to the projection equipment. The orchestra was augmented and was placed under the direction of well known local violinist F J Coles.

The Picture House needed serious updating and to justify the costs a significant increase in capacity was needed and which the growing population would support, so the cinema closed on May 2nd 1931 and was demolished to make way for a completely new cinema. The last programme of silent movies was advertised ‘the final feature being “Fast Company” - after which the cinema closed and the old Picture Palace was to be no more.

Amazingly, in just 14 months the old cinema was demolished, the site cleared and a brand new Picture House erected.

A vintage photograph of the Picture Palace:
http://www.flickr.com/photos/cinesaint/4742158103/

KenRoe and Patrick.once again great reading and the pictures are great.

Great Name for a theatre.