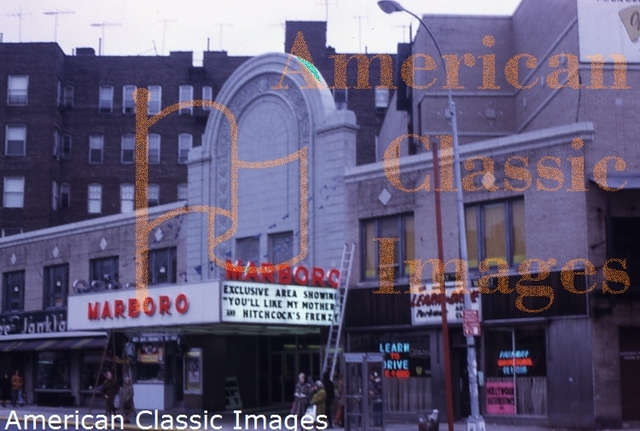 Opened on June 28, 1927, the Marboro Theatre served the Bensonhurst area of Brooklyn for 75 years. Seating was provided in orchestra and balcony levels for 2,252. Decorations in the theatre were carried out by Rambusch & Co. It was equipped with a Wurlitzer 2 manual, 8 rank organ.

Doesn’t it appear the photo in the article is swiped from cinematreasures?

It does, Bway. I’ve noticed photos and comments from this site (including some of mine), pulled (and, in terms of comments, entirely verbatim) and posted on other websites; some people can’t be bothered to give credit where it’s due.

I think i saw rocky there and if theres anyplace to see a rocky movie its bensonhurst. people were cheering and jumping up and down in the seats. wow.

Wow. Just for fun I was googling my old neighborhoods in Brooklyn (No, I didnt live in Bensonhurst) and looking at what they look like now using the “street views” in the map section of google. Out of curiosity, I also looked up the neighborhoods of some old friends. Some of which lived in Bensonhurst. Eventually I fell upon this site.

One friend lived only a few blocks away from the old Marboro theater. The both of us were quite the movie fanatics (I’m still a fanatic about movies). I would take the bus into his neighborhood at least once a week (mid 1970s-mid 1980s) and we would go to one of the several movie theaters that still existed in Bensonhurst. Mostly we went to the Marboro theater.

I remember the little lunchonette next door. My friend insisted that I try their egg cream, saying it was the best (It was good, but it didnt really taste any different from all the other egg creams I’ve had all over Brooklyn). I remember that the Elliot Gould, Shelley Winters movie, Over The Brooklyn Bridge (working title: My Little Shiksa) was filmed in the lunchonette next door. The movie company also had to shut down the Marboro even though they werent filming there. I assume they needed the space in front of the theater for their moviemaking equipment and crew. (While I never saw Shelley Winters, I did manage to catch a glimpse of Elliot Gould). I also do recall on the Marboro marquee, advertising the midnight showings of Rocky Horror Picture Show. (I was too young to be out at midnight, so I wouldnt get to see that movie, at home on my VCR, untill they released it on videotape for the first time many years later)

Anyways, its kind of SAD to hear what happened to that theater. Reading all these posts on this board, from its closing, to its neglect and disrepair, to its ownership changing hands, to its final demolition. Plus seeing those photos before and after the demolition. A very sad ending to a very nice movie theater.

Having seen many movies in many different theaters in Brooklyn, I cant exactly remember the names of each and every movie I saw there. But I do recall seeing SOME blockbusters of the 1970s: Star Wars, Superman, Grease, etc. And some cult horror films from the 1980s like “Sleepaway Camp”.

I wrote in my blog about one of my eperiences that took place in the Marboro theater here:

An excerpt of an article from last year:

Coming soon to this old moviehouse
By Ben Muessig

A movie theater that entertained Bensonhurst until blight reduced it to rubble is now showing a mystery.

Real-estate brokers are taking offers for a vacant lot on Bay Parkway that was once home to the Marboro Cinema, but no one knows what kind of building will replace the former multiplex.

Zoning laws will allow developers to build almost anything on the half-block lot: apartments, offices, shops, or even another movie theater, according to broker Jeffrey Shalom.

â€œCommercial, residential or mixed-use can be built there,â€ Shalom said. â€œThere is an opportunity to build the largest new retail store in the neighborhood. This is what makes the property so unique. â€¦ There is no other development site in the community where such a building can be built.â€

What a shame the Marboro is now just a vacant lot awaiting it’s new purpose. Sad.

I remember going to see Castaway there. It was a very cold night in Bklyn. I’m talking way below freezing. The Marboro was not close to home and I didn’t have a car so it was a trek. The paper had the last showtime listed at 10:45. I arrived at the Marboro right about 10:45 to find out the paper was wrong. Last show was at 10:30 and the box office was closed. I pleaded with the manager but to no avail. My friend and I froze going home.

Thank you, lostmemory, for that great pic from 1973. It brought back a lot of memories. I grew up 3 blocks from the Marboro and saw a lot of movies there – Jaws, Earthquake, The Sting and of course, the midnight Rocky Horror shows, to name a few. The theater was gigantic and beautiful. Unfortunately, like all the other movie theaters in Bensonhurst, it closed. There’s now a CVS and Rainbow Shops where it used to stand.

It became a Quad in Fall of 1978, could get exact date due to Newspaper strike in NYC