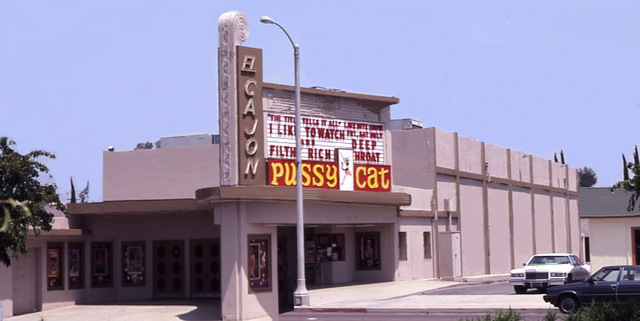 Replacing an earlier El Cajon Theatre which was destroyed by fire in 1945. The El Cajon Theatre was opened April 24, 1946. In 1973, it became one of four Pussycat Theatres to operate in the San Diego area, screening adult movies. It was closed in 1991 and was demolished.

There’s a photo of the El Cajon Theater’s Pussycat incarnation in this week’s new San Diego Reader, with an updated and expanded version of the ongoing Pussycat Theater project – View link

Eventually, weekly protests were held in front of the pink-and-mauve theater by the Santee Bible Missionary Fellowship, and the city council made no secret of its wish to close the theater down and/or force it to return to screening family films.

It took until December 1989 before the theater finally shed its X skin. The first all-age screening at the renamed El Cajon Family Theater was All Dogs Go to Heaven, with all seats priced at $1.99. One of the theaterâ€™s new features was a “cry room,” where parents with noisy babies could watch the movie without disturbing other patrons. The renovated snack bar offered gourmet cookies, bottled mineral water, and nachos, alongside traditional movie treats like popcorn and candy.

In June 1991, operators announced the El Cajon would soon be shuttered for good. Walnut rep Barry Hartsfield said the price the city had been negotiating for the past year was acceptable.

“We are ready to sell,” he told the San Diego Union-Tribune (6-13-91). The locale was razed the following year.

There were two theaters called El Cajon, this one being a 1946 replacement for a house that had burned the previous year. Boxoffice of July 20, 1946, ran a double-page spread on the new El Cajon, which had opened on April 24.

The El Cajon Theatre was designed by architect Robert Halley Jr. (one of his last works, if not the very last) and his associate James Wheeler. James Wheeler might have been related to William Henry Wheeler, architect of the Balboa Theatre in San Diego (and former partner of Robert Halley jr.), but I’ve been unable to confirm a connection.

The theater in El Cajon couldn’t have been demolished in ‘81. I lived in El Cajon from '84 til January '87 and went to the Pussycat a number of times.