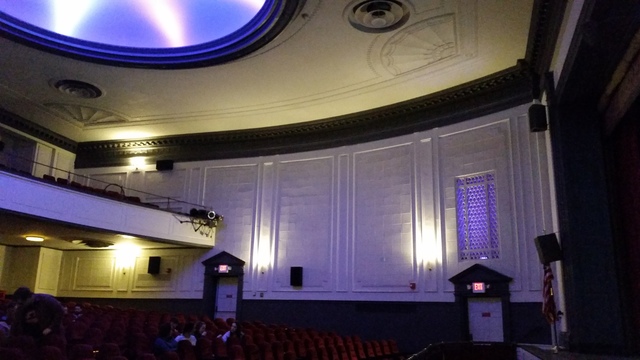 The Edmond Town Hall Theater is, as one might expect, inside the town hall in the town of Newtown. It has been screening films since around 1930, when seating was originally provided for 650. An independent operator leases the auditorium from the town and uses it as a cinema. Second run films are shown daily for an admission fee of only $2.

New seating was installed in 2007, reducing the capacity to 225.

There was an article in today’s local section of the News-Times about the new seats and eventual restoration of theater.

The new seats replace the ones installed in 1960 and they are red and plush with cup holders. Last week there was an invite only gathering for those who donated money for the new seats, totalling $124,000. 441 people donated money. It took a year to install the seats in the orchestra and balcony and they are ADA compliant.

There is now new carpeting and heavy-duty vinyl flooring, and the theater manager Tom Mahoney wants to repair the plaster, have a new paint job, new acoustic paneling, a new movie screen, upgrade the stage lighting and have a new curtain for the stage and would like the upgrades to be in the same 1932 art deco style as the original.

It’s been steady ever since I can remember and the crowds have no problem and the food’s cheap.

Update on the architects. A nice sign in the lobby says “Philip Sunderland and Edmund Watson” (The H. Wales Company, 1928-30).

I was there last week for Leatherheads. Haven’t been there in some time but they have new seats! Very comfy.

I went there yesterday to see the 2nd showing at 9pm of young at heart. Unfortunately the movie was cancelled. The owner said that he needed at least 8 people to see the 9pm (his policy). Only 3 of us were there so he shut down and gave each of us 2 free passes.

It now has new seats but it only holds about 225 folks.

I finally talked to the night manager of the theatre last week. It’s leased for $1 and has been showing movies since 1930, but I may be off by a year or so.

This isn’t really the Town Hall, that is located a few miles down the road in the Fairfield Hills Complex on Primrose Lane.

They make most of their money from the insanely cheap concessions.

An angel investor just gave a chunk of money to restore the plaster ceiling (for opera) and repair a bathroom.

A few months ago they added some new features to the interior; lighting and surround sound. There are permanent lights in the balcony that illuminate the otherwise plain dome in a blue glow. Also, either end of the stage’s grates have the same lights inside, making them glow a soft blue.

They added surround sound, so though it seems like someone is behind you it’s just 10 more speakers; 4 around the screen, 4 in the auditorium and 2 in the rear. Big difference.