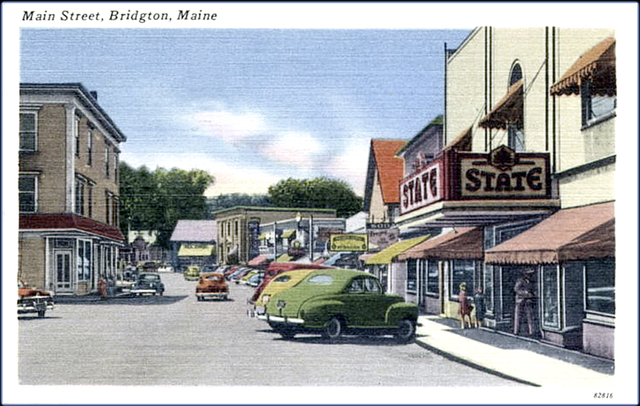 The State Theater was opened on July 1, 1935. The building collapsed after a heavy snowfall in March 1969.

From 1940 a postcard view of the State Theater in Bridgton.

PLEASE ADD TO THE ADDRESS:

I visited Bridgton this week and was able to place the theatre location by locating the two building still standing from the postcard pictured above. Where it appears there theatre would have been stands a building that is much newer than the rest of the downtown buildings. The theatre thusly is demolished. The address would’ve been 154 or 156 Main St.

The Theatre Historical Society archive has the MGM Theatre Report for the State – Card # 347. Address is Main St. There is an exterior photo taken April 18, 1941. Condition is Good. Report says it opened in 1936, was showing MGM product, and had 650 seats.

The earliest mention of the State I’ve found in the trades is from the July 6, 1933 issue of The Film Daily and it simply says: “Bridgton, Me.— C. W. Millett has closed the State.”

Another brief item appears in the May 2, 1936 issue of Motion Picture Herald: “C. F. Millett is having the State, 900-seat theatre in Bridgton, Me., extensively reconditioned.” This would probably account for the claim of a 1936 opening for the State in the MGM Theatre Report cited earlier by Ron Salters.

Address was 78 Main Street. Opened July 1, 1935 (article added) Collapsed after heavy snowfall in March 1969 and demolished.(Article added saying 34 years of operation, which confirms the 1935 opening.) Built owned and managed by the Millet Family. Designed with no stairs to accommodate the grandmother in a wheelchair. Multiple other images added as well.