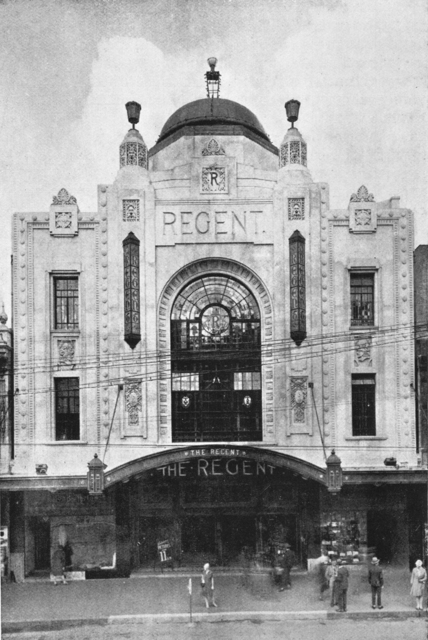 Built on the site of the Duke of Edinborough Theatre (the first theatre in Auckland). The Regent Theatre opened in December 1926 with Ronald Colman in “Beau Geste” and vaudeville acts. It was part of the J.C. Williamson chain and weekly changes of vaudeville acts came directly from the Tivoli Theatre’s in Sydney & Melbourne. The Regent Theatre featured a Wurlitzer Model F, 2 Manual 8 Ranks theatre organ which was opened by American organist Eddie Horton in February 1927. The theatre had an under-stage swimming pool for water spectaculars. The theatre also boasted a café, a ballroom and a roof garden. The Wurlitzer organ was offered ‘For Sale’ in 1944 and it was purchased and installed in Hutt Valley High School.

The Regent Theater had a Mighty WurliTizer Theater Pipe Organ, Opus 1475. The 2 manual (keyboards)/8 rank (sets of pipes of the same kind) was shipped on 15 October 1926. In 1944 it was sold to Hutt Valley High School in Wellington, New Zealand. In 1969 it was sold to Lindsay Anderson of Wellington. He sold it to Hollywood Theater, Avondale-Les Stenersen, back in Auckland in 1978. In 1998 it was replaced with a 3 manual counsole and the 2 manual counsole was sold to Michael Woolf back in Wellington. Does anyone know if the Hollywood Theater still stands, is still in use and does the organ still work?

On the Regent,anyone have an address, more info or photos?

Here is a 1974 street view of the Regent before it was sadly demolished:
View link
And here is one from 1927
View link

I enjoyed going to the Regent in the 1970’s to see Monty Python movies, I hope someone has some auditorium photos to share. It had a very wide auditorium with the upstairs circle nearly encasing the whole building in an arc leading to exit door either side. The main theatre was also built parallel to Queen Street with a long access foyer curtained behind the auditorium to the circle as similar to this photo of the Regent in Wellington:
View link

The Hollywood Theatre in Avondale is a living breathing Cinema. The Wurlitzer organ mentioned above is still in the theatre and one Sunday per month there is a recital