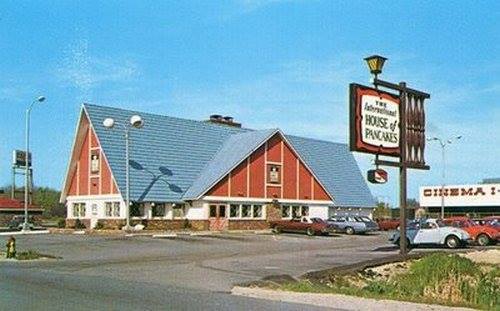 The Maine Mall Cinema 7 was a seven screen cinema that used to be located adjacent to the Maine Mall. Here are some facts about the theatre.

-Opened in 1975 as a 3 screen cinema by General Cinemas

-Plans for Commons are scrapped for where the cinemas location was and the lot became a car dealership.

Theater was built by General Cinemas.

I worked at Maine Mall Cinema from 1979 – 1981 when it was a 3 screen and then again from 1986-1989 when it was a 7 screen. I much preferred it as a 3 screen. It was always General Cinama until the end when the sold it to AMC. It was the premiere movie theatre in southern Maine for much of its life. We always got the best first run movies. I have many fond memories of working there. I remember popping corn in the upstairs popping room for 13 straight hours getting ready for Empire Stikes back. People lined up around the building for hours before opening to see that movie. It makes me very sad and nostalgic to see a vacant parking lot there. Generations of kids growing up not knowing that the best movie theatre in Southern Maine once stood there. I also worked at the Pizza Hut next to it which is also gone now. How sad.

Photo and caption added via Charles Howard. “IHOP in South Portland Maine across from the Maine Mall.” MarkChellis can you confirm that this angle is correct for the Maine Mall Cinema? Signage might read “Cinema I-III” but is cut off on the right.

In March of 2002, AMC Theatres officially took on the General Cinema locations. AMC closed its AMC Maine Mall Cinema 7 on November 3, 2002 after 27 years. It was subleased to the Eastpointe Christian Church in the Spring of 2004 which appears to have finished out the final three years on the leasing period. The church moved on and the theatre was demolished in 2007. CarMax later built a car dealership on the former cinema site.

The lot doesn’t sit vacant - it became a car dealership.