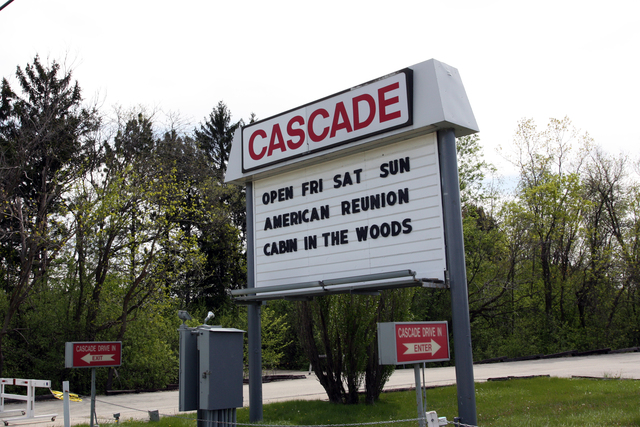 The Cascade Outdoor Theatre opened on August 4, 1961 with Troy Donahue in “Parrish” & Henry Fonda in “Mister Roberts”. In recent years it was one of the only remaining drive-in theatres in the Chicagoland area in operation. It was also the largest in Illinois with parking for over 1,275 cars. It was opened by the Kohlberg Theatres chain, and in 1989, the son of the founder of that chain purchased the Cascade Drive-In and owns and ran it.

The Cascade Drive-In screened double-features, and was open from April to October, seven nights a week. It was closed on November 11, 2018 with “The Grinch” & “A Star is Born”. Its lease expired in March 2019 and sadly the Cascade Drive-In was closed forever. In April 2020 there were hopes it may reopen.

Over 12,000 have signed the below petition for Landmark Status.

The Cascade Drive-In when it was featured on Chicago’s Best. Check it out!

We are sorry to announce to all of you that sadly the Cascade Drive-In theater will not open for 2019 season and beyond. The owner of the land has decided that he will not permit the theater to open and we are unable to continue to provide a rare entertainment to the community of West Chicago and beyond. The land is not sold and is not under contract nor has any new plan been submitted to the City of West Chicago. The property will simply be vacant and no further operations will be permitted to continue. I can only surmise that the landowner believes he has a better chance to get any future development approval from the city of West Chicago and surrounding community if the business is closed. They have been informed after each of their previous concepts presented for approval from the City that property will be zoned for residential not industrial. All proposals presented were determined by the City, besides not being residential also included heavy semi-truck traffic and were rejected. The rejection had absolutely nothing to do with the Cascade. I was informed even if the Amazon distribution center were to attempt to develop on this location they would turn it down. Again, nothing to do with the Cascade. For last year we have attempted via phone, email and letter to the landowner and his representatives to find out our status and have received no response. A short response was given to our attorney several months ago stating they were waiting for the City to advise them of what they would approve for the property development. We have operated the Cascade Drive-In for 30 years and paid close to $6,000,000 in rent to the landowner. I have operated Drive-Ins since the 1950’s with my late father. Its devastating to us but we always knew the sale would be imminent one day but this scenario of closing with no other use for the property was totally unexpected. A conversation and a decent transition would have been the least we could expect from the landowner. Not often that you see a thriving business to close but its out of our hands. Just want to thank every family that has come to the Cascade and enjoyed the experience of viewing two first run movies on giant outdoor screen. We want to let everyone know that Saturday 3/23 after 4:00 PM at the Cascade Drive-In we will have Cascade hoodies for sale so come on out and get a piece of nostalgia. Inform anyone that we have equipment such as popcorn poppers, warmers, hot chocolate machine, freezers, grills, and even a golf cart for sale if you know of anyone interested. Thank you so much. Our hearts are broken!

Iconic Cascade Drive-In Closes After 58 Years In West Chicago – Owners of the drive-in theater thanked customers for their support and said, “Our hearts are broken.” (By Lisa Marie Farver, Patch Staff, March 15-18, 2019) ——
WEST CHICAGO, IL — For the past 58 years, you’d know it was the start of summer in the western suburbs by the blinking of fireflies, the chirping of birds, and the smell of popcorn and flickering of big-screen movies at the Cascade Drive-In theater. Just as the iconic drive-in was prepping to open for its 2019 season, news comes that the screens will stay dark. The owners announced Friday that the theater, one of the last of its kind in Chicagoland, has closed indefinitely. The theater’s owners said on Facebook Friday that the property owner has decided not to permit the theater to open. The parcel of land is up for sale, but Cascade Drive-In owners say it has not yet been sold and that no development plans have been made. Cascade Drive-In owners say they can “only surmise that the landowner believes he has a better chance to get any future development approval from the city of West Chicago and surrounding community if the business is closed.” The current owners have operated the drive-in for the past three decades and have paid $6 million in rent, the Facebook post said. They added “A conversation and a decent transition would have been the least we could expect from the landowner. It’s devastating to us but we always knew the sale would be imminent one day but this scenario of closing with no other use for the property was totally unexpected.” On March 23, Cascade will host a sale of hoodies, popcorn machines, grills, a golf cart and more to give customers a chance to get their hands on a “piece of nostalgia.” The owners of Cascade closed their post by expressing a sentiment that will likely be shared throughout the surrounding community in the wake of news of the drive-in’s closure. They said, “Our hearts are broken.”

Opened with “Parish” and “Mister Roberts”.

Cascade is trying to re-open.

West Chicago pushes back the hearing about reopening the Cascade back to November: https://www.dailyherald.com/news/20201007/west-chicago-reschedules-hearing-on-cascade-drive-in-reopening-plan