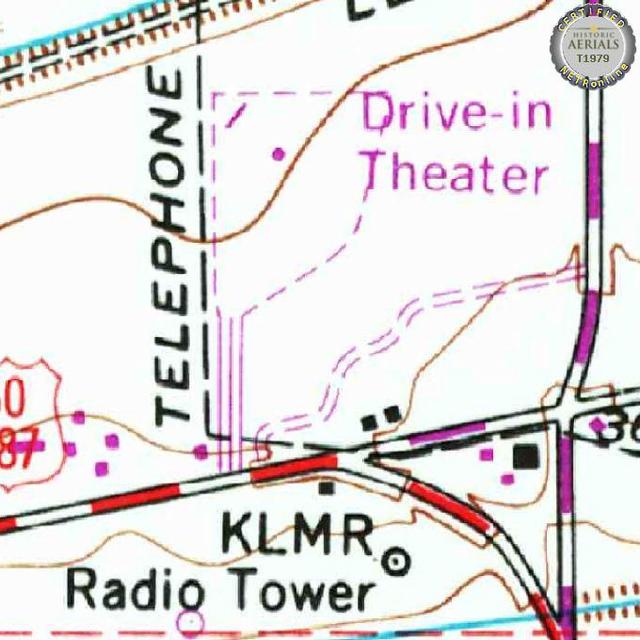 I know very little about this theater except that it was built to replace the old drive-in that sat on the eastern side of Highway 50 in Lamar, CO. This drive-in sits on the north west edge of Lamar. The Arrow Drive-In was opened by Evergreen Theatres on June 22, 1973 with Cliff Robertson in “J.W. Coop” & John Wayne in “Rio Bravo”.

The marquee, concession/projection building and some ramps remain. The ticket booth and screen no longer exist. A steel addition was added to the south end of the projection/concession building which was from a past tenant, not the theater.

It is currently occupied by Paul’s Auto Body.

Couldn’t find anything in my 1956 motion picture Almanac,either had closed or was not built yet.

It was most likely not built yet. The other drive in I mentioned was called the Arrow (I believe) and I believe that the Lamar was built to replace it (in a new location) due to a fire or some other undesired closure.

On the Google photo from the street I saw what looked like a marquee still standing, is that what it is?

I could find nothing on a Lamar Drive-In, only on an Arrow and Kar-Vu.

Anyone have more info or photos on the Lamar Drive-In.

Yes, I have seen that image and that is indeed the marquee. The theater sat a little ways back behind it. The Arrow was the other Drive-In in town (not listed on CT but I have mentioned it a couple times on The Lamar Drive-In page) and the Kar-Vu was in Springfield, a town about 50 miles south of Lamar on the Oklahoma border. It closed recently and has a page on here. I visited it recently and added a comment about what I saw.

I believe that the Arrow Drive-In east of Lamar closed in the early 60’s due to the big flood that went through there.

My dad, my mother and her brothers worked at both the Lamar Theatre and the Arrow Drive-in during the mid to late 50’s and 60’s. I still have a couple of the old calendars of upcoming movies for both theaters from around 1958/59.

As I mentioned on the page for the Kar-Vu in Lamar, the Arrow debuted in the Motion Picture Almanac drive-in list in the 1977 edition, though it’s likely that it opened a bit earlier. If it truly replaced the east side Kar-Vu, it would have been in the early 1970s.

Boxoffice, Jan. 17, 1977: “Evergreen Theatres has sold its Century Theatre and Arrow Drive-In at Lamar to Dan Wolfenbarger of Dumas, Tex. Vern Peterson and John Lindsey of Evergreen said they will concentrate on the newly remodeled Rialto and Pines Drive-In at Loveland as well as their theatres in Ogallala, Neb.”

Boxoffice, Aug. 6, 1973: “Evergreen Theatres of Colorado, headquartered in Loveland, Colo., recently opened a new 300-car ozoner on Highway 50 on the western edge of Lamar. Named the Arrow Drive-In, the theatre is operated by Vern Peterson and John Lindsay and will operate on a two-change-a-week, split-week policy.”

The Arrow’s Grand Opening ad in the Tri-State Daily News was on June 22, 1973. Its first double feature was a couple of oldies: Cliff Robertson in “J. W. Coop” (1971) and John Wayne in “Rio Lobo” (1970). Admission was $1.25 for adults but free for children under 12, and the ladies received free potted plants from The Flower and Gift Chalet. Clarence Cox managed the Arrow as well as the indoor Century.