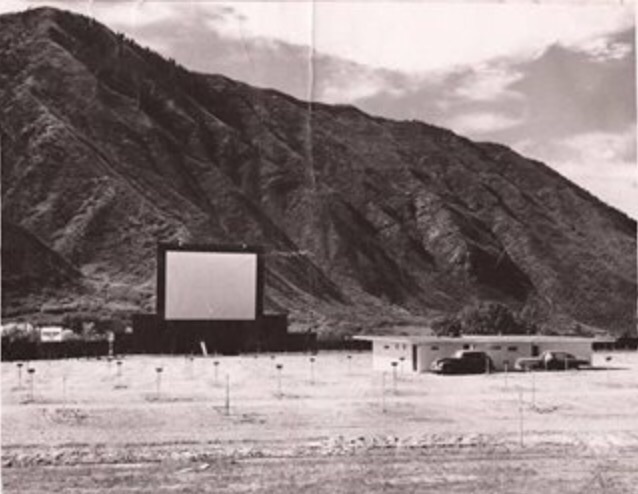 The Canyon Drive-In was opened on September 12, 1950 with Jack Carson in “The Good Humor Man”. It was closed on September 10, 1979. It was demolished in the early-1980’s for the Glenwood Springs Mall to be built on the site.

The screen faced north and sat where the Checker Auto Parts currently sits on the mall lot. Ironically, the Movies In The Mall Theater (formerly the Mall 3) sits in the mall, almost exactly where the concession/projection building for the drive-in was located.

Anthony,Here is alittle more on the Drive-in you put on, The Canyon Drive-in parked 325 cars and was owned way back in 1956 by Glen theatres.Charles R. Gilmour president.

You are the man Mike.See what you can find on the Old Hickory Drive-in Nashville it is not on C.T. I Believe,Its one of the Crescent Amustment ones,Thanks.

Well, Tlsloews it is not in the book so it either wasn’t built yet or had already closed.You might have to get some old newspaper ads from the Nashville paper.You had Bel-air.
Bordeaux
Colonial
Crescent
Skyway Drive-ins. in 1956. I know Nashville had more Drive-ins that that so i assume they were located in small towns nearby that the locals today,just call Nashville.

This one may by listed in Old Hickory Tennessee, named after Andrew Jacksons nickname, You posted about it the other night on the Crescent Amusement Stuff.

Andrew Jackson, And me a history major,for the life of me i couldn’t remember President Jackson.No Old Hickory listed.I went down the list of Drive-ins,almost two pages in the book and didn’t even spot an Old Hickory Drive-in.Sorry,Tls.

Yeah Mike he and his wife are buried at his home The Hermitage right outside of Nashville, no big deal about the drive-in I will see what I can find out.Now back to the Canyon Drive-in.

Okay.Wish i could have helped.

A more accurate address for this theater is 51079 Hwy 6, Glenwood Springs, CO 81601. This points directly to the entrance road which is now Big O Tires south of the mall proper.

From the Steamboat Pilot of Steamboat Springs CO, Aug. 10, 1950: “Construction is well underway on the new drive-in theatre west of Glenwood on Highways 6 and 24. Latest type screening and auditory facilities have been installed and the new theatre will be named ‘Canyon Drive-In Theatre.’”

On March 7, 2002, the Glenwood Springs Post Independent ran an article by Willa Soncarty of the local Frontier Historical Museum, and it nailed down all the major details.

“Glenwood Springs became part of the drive-in theater craze in 1950. That August, manager Dan Cornwall oversaw construction of the community’s first and only drive-in theater. … Its site allowed parking for 325 automobiles. … 50-foot movie screen … “Moon-Glo” lights gently illuminated the site … On September 12, 1950, the Canyon Drive-In welcomed guests to the showing of its first movie, “(The) Good Humor Man.” … The final movie at the Canyon Drive-In was shown on Sept. 10, 1979.”