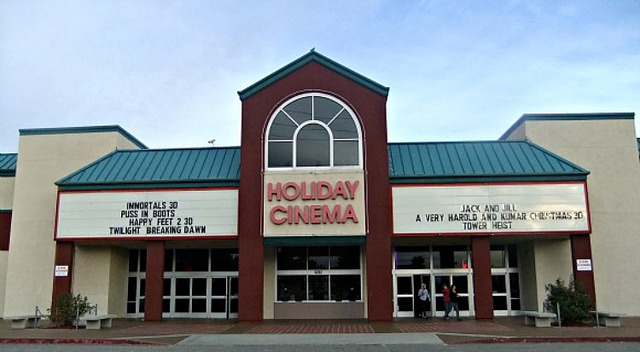 The Holiday Cinemas is located at 6262 West Lane and is operated by Signature Theatres.

I never heard of a chain called Cinerama. I notice that the style is listed as Cinerama which is OK if the theatre is old enough, but an 8 plex? Was the Cinerama theatre divided up and/or had additional theatres added to it?

The Holiday Theater was designed by the San Francisco architectural firm Uesugi & Associates, which did quite a bit of work for the Signature Theatres chain before it was taken over by Regal.

My understanding is that the first full length public Cinerama film for the general audience was “Cinerama Holiday,” which I, as a school child in my home town of Stockton, was taken by arrangement through the school on a train field trip to see in San Francisco (I don’t remember which theater there) probably in 1955 or ‘54. I have a faint recollection of hearing of such a theater planned for Stockton, but it is very faint.

Being older and wiser now, and knowing how many theaters were located in Stockton on the main strip in the ‘50s (a tiny version of a Broadway of picture shows, to a child’s eyes), I suspect now many were constructed by Los Angeles studios, to preview their own films. I am also wondering if there was a link from the field trip for the students (which came up rather suddenly, out of the blue) to any number of promotional ideas — accustom the children to Cinerama; build a Cinerama theater in Stockton, and base it on a population accustomed to patronizing the many already established “picture shows.” I have a faint remembrance that was what this was about. My recollection was in 1956 the population was about 80-90,000. It was considered then to be the third largest city in the San Joaquin or larger valley.

I don’t remember this theater, although it was not in my part of town, from which I would have walked downtown with others, or taken the bus to see movies downtown, or occasionally attend a drive-in.

SPearce
The only non full length CINERAMA movie that I know of was an 18 minute 360-degree screen film “To the Moon & Beyond” shown at the 1964 & 1965 New York Worlds Fair. The first full length CINERAMA movie was “This is CINERAMA”. An interesting site all about the CINERAMA movies and the CINERAMA theaters is
http://cinerama.topcities.com/
To perhaps bring back some memories of “CINERAMA Holiday” go to
http://www.imdp.com/title/tt0047939/
I notice that Cinema Treasures no longer lists any Chains or Styles as CINERAMA, which is how it should be.

“Ladies and Gentlemen, this is CINERAMA!” Lowell Thomas, September 30, 1952

“Gee Dad, it was a Wurlitzer!”

Ret. AKC(NAC) Bob Jensen
Thank you. Sometime in the early Spring of 1955 seems about right for my viewing of it; it had already been playing about a month or so in San Francisco.