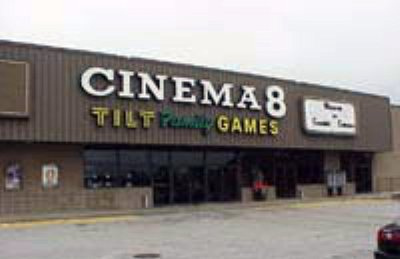 The Conyers 4 was opened by Septum Cinemas on June 17, 1983. By 1985 it had expanded to eight screens as the Conyer Cinema 8 and was operated by Plitt Theatres and later Carmike Cinemas. It was closed in 2001.

Opened officially as Conyers Cinema 4 summer 1983. Pretty state-of-the-art compared to Salem Gate Twin down the highway. Played first run fare and had Dolby in the large theatres. Later expanded to five screens a year later, then eventually eight summer 1985. Did door-busting business up until the Carmike Crossroads 16 finally opened in 2001 and Conyers got with the times. Nice theatre for the time period as poor Salem Gate tried to compete but eventually went the dollar house route before closing.

Thanks for posting the photos Alonzo.

Atlanta, like so many cities under went an over screening process during the Eighties which every chain would build something better and kill the cinema down the road,I knew a Theatre Manager that called them “DEATHSTARS”.