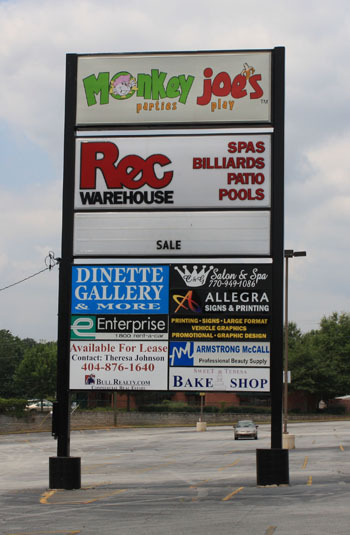 The Cineplex Odeon opened the Exchange Cinema 3 on August 7, 1987. Later operated by Carmike Cinemas it was closed in 2003.

Wasn’t this a old Cineplex location, maybe even Plitt?

Does CARMIKE ever try and keep a theatre open?

They are good at shutting them down.

In Carmike’s defense, the batch of locations they took over from Cineplex was in poor shape. Cineplex took, IMHO, the best chain at the time in Atlanta, Plitt and the shabbiest run, Septum and made a huge mess. But then again they were due since thier previous company, Martin, unloaded a similar batch on GTC some years earlier.

Doesn’t make sense to take over a “shabby” theatre.I have seen some of their theatres in smaller towns and they are dumps.

Carmike’s old (late 70’s – early 80’s) twins and triples seem to cover the small towns of the Southeast. No competition coupled to the bad economy in the business during the bankruptcy era allowed many of them to become pretty threadbare. The newer locations are not better or worse than everybody else.

It just seems on CT they close more,than open.Tlsloews in Nashville has noticed the same trend ,right or wrong.

This opened on August 7th, 1987 and closed in 2003. Owners were Cineplex Odeon and Carmike. Ad in photo section.

Anyone know anything about the theater right around the corner from this one? Was in the old K-Mart shopping center.