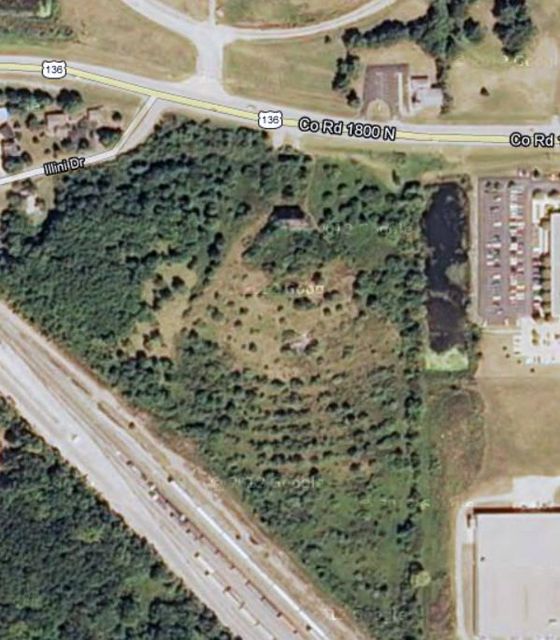 The Illiana Drive-In was was opened around 1954 when it was operated by Wisher Meyer of the East Side Auto Theatre Corp. and S.B. Greiver. Single screen theater with large block screen tower, the base of which still exists. This was the last of the Butler Enterprise theaters to close in 1983

Uploaded Goggle Aerial’s from 1993 and 2012. It looks like it could be reopened again??

In a Goggle Earth flyover as recent as 2014 the Illiana can be seen as heavily overgrown from decades of apparent abandonment, though you can clearly see where the ramps were. It appears that the concession stand & booth are gone, but the original block building used as the screen is still standing. Incidentally, this “screen” barely accommodated a 1.5:1 aspect ratio so for any 2.35:1 shows the audience lost nearly half of the picture, though no one ever seemed to complain. Located where it was, well outside the city, the Illiana “got away” with many of the more racier films (for that era). The only time the Illiana was ever (temporarily) shut down was in the summer of 1969 for showing Russ Meyer’s VIXEN, after it had been playing to a nightly sellout crowd and held-over for the beginning of a 4th week (film seized, projectionist & mgr both arrested & taken to the Vermilion County jail, along with theater owner Jack Butler). According to local folklore this action was said to be in response to weeks of continuing local clergy outcry. Charges were eventually dropped, but the film was never returned.

wonder what the front side of the screen looks like?

The location of this drive in is just west of 3290 E Main St, Danville, IL 61834. This is the address of Blue Cross Danville, the building seen next to the drive in. The screen base is still there.

My Aunt and Uncle managed it when Jack Butler owned it. I’m pretty sure I have some pictures I will just have to find them. I worked there from about 1968 through 1977. It was a great place to work.

Why was the drive-in called Illiana?

Because it is on the border of the states Illinois and Indiana.

The Sky-Way was one of two Danville drive-ins (with the Dixie) in the 1952 Theatre Catalog. Owner Jack Butler, capacity 600.