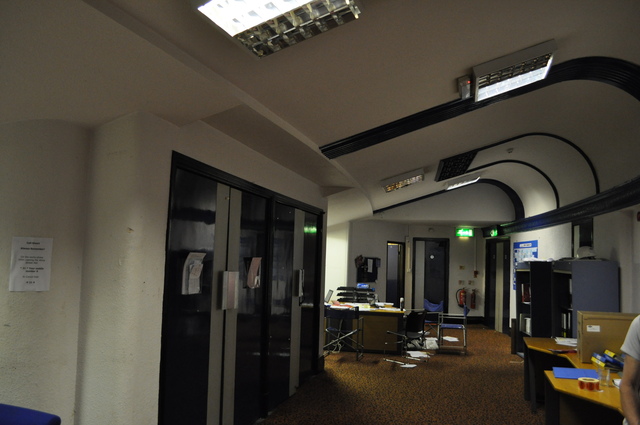 The Regal Cinema opened on 19 September 1938 with Otto Kruger in “Housemaster” & Jane Withers in “Checkers”. The opening was just three months after the large Odeon opened. It was however in a much better location on Ward’s End crossroad. There was an entertainment venue on each corner of the intersection, the Victoria Theatre (Civic), the Picture House (a Gaumont property) and an independent cinema occupied the other three corners. The Alexandra, Electric, and Theatre Royal were also nearby.

Designed by William R. Glen (ABC’s in-house architect), the Regal Cinema was a particularly fine 1,938-seat cinema, with 1,250 seats in the stalls and 688 in the balcony. A shallow stage was provided and four dressing rooms. The proscenium was wide and surrounded by an elaborate plaster fretwork concealing ventilation ducts. On either side were niches containing tall slender figurines which were not dis-similar to the ‘Oscar’ statues.

The cinema was tripled in 1976 (having been renamed ABC in 1961) and reopened on 12 September with 670 in screen 1, the original circle using the original unaltered screen, and 200 and 173 seats in screens 2 & 3 situated under the balcony.

Renamed Cannon and then back to ABC the cinema closed suddenly in 2002 having been bought for use as a nightclub.

Fortunately it was designated a Grade II Listed building in 2000. This has ensured that all elements of the original (it had survived basically intact) are to be preserved. English Heritage described it as ‘Long curved stone exterior. A handsome surviving classical auditorium. One of the best of the few surviving original ABC auditoria’. However the construction of the nightclub, using the stalls area only, will effectively conceal all trace of the original design. The circle will not be used at all. What a waste!

Work on the insertion of the nightclub began in the Summer of 2002.

I frequently carried out relief duties at this most impressive theatre and, on a couple of occasions, took over for Jim Thompson’s fortnight’s holiday.

Whilst I always got on well with the opposition in any town where I worked, Halifax was really brilliant with everyone at the Odeon and Astra being very friendly, particularly at the former.

I drew the short straw to be the Relief on the very day that the contractors moved in to start the tripling process and I tried to sneak in on that morning to avoid being waylaid by anyone. However, as my feet touched the first of the circle stairs to go up to the office I was collared by the Head Cleaner who had a list of problems concerning the invaders of the building…….

I have to say that no time was wasted by the contractors, as by the end of my second day (the cinema was open evenings only in the circle), all the stalls seats had been removed plus all the HF Pride auditorium chandeliers and spray fittings and one of the statuettes in the splay alcoves had been knocked over onto the Front Stalls (now bare) floorboards and broken – the vandals!

We were lucky to get access to the former Regal Cinema and interviewed former cinema employee Peter Berry.

The very last Manager of the ABC is a good friend who joined ABC about four or five years after I did in the early 1970’s. It is a coincidence that the above should appear now as he and his wife are staying with me for a few days from tomorrow; I am sure that he will be fascinated to see the YouTube interview of the interesting former projectionist who worked at the Regal in its glory days.

The Halifax ABC was always a favourite of mine and, whilst not the largest example (they ranged from 1500 – 3000 seats), it was certainly one of W R Glen’s finer buildings and I hope that some good use will be found for it.

Ironically, it was closed by former rival company, Odeon who said that the place did not fit comfortably in their portfolio of cinemas. I cannot think why as they re-branded venues which were far inferior to the Halifax ABC Regal and, whilst Halifax’s original Odeon was a lovely cinema, the Regal had the edge both architecturally and by location.

Three external shots have been uploaded to the relevant section. Two date back to the early 1960’s shortly after the Regal name was dropped in favour of the corporate ‘A B C’ . This happened across the circuit except where the company had more than one venue in a town or city when the original name(s) would be retained at the other cinema(s). There were exceptions where both main theatres would be renamed ABC and differentiated by street name, for example the ABC’s George Street and Magdalen Street, Oxford.

Article about the Odeon and Regal, Halifax. According to this the opening capacity of the Regal was 1938 with the circle seating 688 and not 668. I did wonder how, after slightly larger seats were installed in the circle in 1974, it somehow (with 670 seats) managed to accommodate 2 more people than in 1938…….

The ABC Regal was unusual in having a Christie organ rather than the usual Compton or Wurlitzer ( Union Cinemas, taken over by ABC, usually had the latter). The Christie organ was transferred from one of ABC’s East London cinemas, the Queens, Forest Gate which in 1941 was destroyed in an air raid but they managed to salvage the organ and transfer it to Halifax.

I have uploaded a photo of the main auditorium of ABC Halifax (former circle). During the triple conversion the EMI/ABC Company removed three huge chandeliers from above the front stalls in addition to all those above the front and rear circle. ‘Flush’ fittings were then inserted in the main ‘stalactite’ design ceiling. Whilst this did impose on the auditorium’s grandeur it did not harm its appearance too much.

The front stalls seating here could have been retained as the ‘drop wall’ did not encroach on this area plus the exits were still accessible; I suppose, however, that the circle capacity of 670 was considered large enough even for the occasional ‘blockbuster’ in 1976 - how times had changed!

The full width of the proscenium cannot be seen from the angle of the shot but as I recall it was about 55 feet which was wide by any standards in the 1930’s and certainly much wider than those of two sister theatres, York and Harrogate where the auditoria (particularly at York) narrowed severely at the stage end. When CinemaScope was installed in those theatres, rising festoons had to be installed in order to maximise the sheet size.

In Halifax, needless to say, tabs were always used (originally two sets but reduced to just the house set upon installation of ‘Scope). In the last couple of years of operation, the reformed ABC Company (basically Cannon with the name of its main constituent company reinstated) were too mean to replace the curtain cable when it ‘gave up the ghost’ and the very good quality lined satin house tabs were thenceforth only to be seen hanging at each side. Trust that lot!

One of the projectionists at the ABC once told me that the Halifax born mass murderer, John Reginald Christie had been a projectionist at a cinema called the Coliseum in the town.

I have only today, all these decades later, tried to find out what I could about the Coliseum but , I am afraid to say, that no such place ever existed in Halifax.

What I have discovered, however, is that the notorious person referred to did actually work at the following cinema in 1919:-

I am doing some research to try and find my biological father. He was a regular visitor to the Odeon,Gaumont and Regal/ABC in Halifax. I have been told he worked for the union and collected subs every few weeks. He was a very smartly dressed man of Asian descent believed to be called Robin. I know he was there in 1959 to around 1964. Can anyone remember him? Thanks.