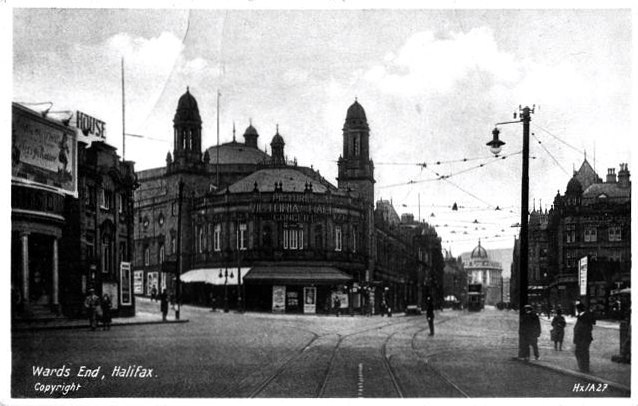 The Victoria Theatre opened as a concert hall in 1901, having been designed by Clement Williams.

Very European in style it became a cinema at some point before 1939.

It has two horseshoe balconies and an ornate flat ceiling with a very deep curved cornice. There is much original, and very attractive stained glass throughout the building, including a spectacular laylight in the upper foyer.

It was purchased by the local authority in 1964 and adapted into the Civic Theatre by the addition of a full stage behind the proscenium arch. There is a fine Hill organ installed and the Victoria is used both for concerts and theatre shows.

Like most of the other main entertainment venues in this town it is located on Ward’s End. It was recently renamed the Victoria Theatre and is a Grade II Listed building.

The Victoria Hall halifax, did not have a proscenium arch at all until after 1964. I had an open platform. Addition of the proscenium was a careful inclusion in the 1964 rebuild. The theatre also has a flat floor, infact one of the largest surviving sprung dance floors in the north of England alongside the Royal Hall Bridlington and Blackpool Tower and The Winter Gardens. This ‘feature’ has been seen as a ‘drawback’ for theatrical productions, as has the stage, which although it is aproximately 48 feet wide, is ‘shallow’ compared to the overall proportions of the building

Some photos of the Victoria Theatre taken in October 2007.

During the summer of 2008 a new raked floor has been laid over the original and new stalls seating provided to improve the comfort. A series of photos – all interior – taken during the refurbishment can be seen here:–