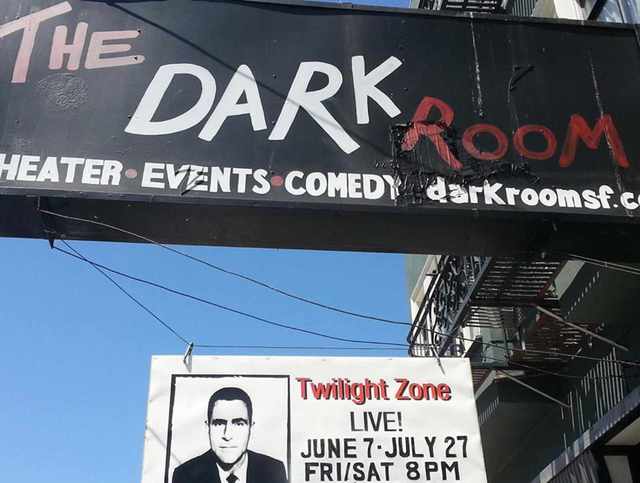 Located in San Francisco’s Mission District. Opened in February 2008, The Dark Room Theater presents stand-up comedy, theater events, and on Sunday evenings it screened classic and revival movies. It was closed in 2015.

I finally found out the hard way,the theatre shown in “DIRTY HARRY” was on the back lot at WARNER BROTHERS. And not in Downtown S.F.

Found 2 photos on the website under Rent The Dark Room, not exactly a movie palace.

Anyone else have info or more photos?

The Dark Room was open by mid-2004 (I was involved with a play there that Summer). A lot of what took place there (at least initially) were things that used to take place at Spanganga, which closed in 2004. It definitely has a stage.

But that’s mainly irrelevant here—it’s not really a movie theater. The “Bad Movie Nights” are the only regular movie screenings it’s ever held, and those are just movies on DVD; I’d be shocked if there were any film projection equipment, much less prints.

All indications are that this venue, which was never much of a movie house, closed in 2015. The article above discusses, among other things, the operator’s assertions that the theatre closed after a chain of events set in motion by a zoning complaint. The space appears to have remained vacant since then.

FYI Mike everything Warners and Disney filmed especially in 60’s through the 80’s was filmed in the Hollywood Hills or Burbank sound stages. Same with MGM Columbia and Culver City, Paramount and Melrose West Hollywood. For example in Mommie, Joan Crawford drove to Culver Blvd. to meet with Mayer, in reality Faye Dunaway drove to 5555 Melrose Ave. as the sctual movie was a Paramount Picture. It’s all made up, fairytales, etc.