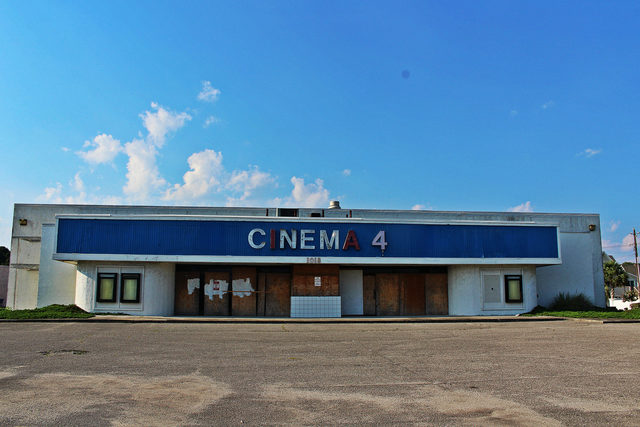 This movie theater was built in 1984, and opened June 1984 by Stewart and Everett Theaters of Charlotte, NC. It was originally going to be a 3 screen complex with a 4th to be added later but with the areas rapid growth at the time the company decided to go ahead with 4 screens out of the gate. Stewart and Everett Theaters owned and operated the theater until Carmike’s buyout December 17, 1986.

Carmike continued running the 4 screen complex until June 25th, 2010. Carmike leased the theater building and when the lease was up in June, Carmike did not renew. The old style auditoriums and out dated design no longer turned a profit.

Auditorium 1 and 4 seated 189 people each, auditorium 2 seated 289 people and auditorium 3 seated 258 people. The exterior is white stucco and the interior remained the original Stewart and Everett blue color scheme. It was demolished late-2018 to early-2019.

thanks again smyjmy for taking the time to get the pictures.Always enjoy looking at them.

your welcome! This empty theater is still for lease if anyone wants to re-open it lol

This theater still looks like this with the exception of another letter in “cinema” missing. Still for lease and decaying.

As of August 2017 the theater is closed, in ill repair, and looks like it’s in need of a new roof. The parking lot has pot holes and, stagnant rain water sit’s everywhere.

Anyone know who owns this land/ Theater as of right now?

The theatre, as well as the entire old Federal Point Shopping Center, was demolished in late 2018 and early 2019. I was there a couple of weeks ago and found new shopping center named the Commons at Federal Point Center which is anchored by a Publix grocery store and several smaller businesses. I managed this theatre the first four years it was open. Granted it was the typical Stewart & Everett Theatre’s style and color scheme of the 80s but it was a good theatre with several nice features. In June 1984 there was tremendous excitement about the opening of the theatre by people who lived in and near Carolina Beach but sadly the theatre struggled with low attendance from the very beginning. The theatre closed 2010 and had become an eyesore so demolition was inevitable Perhaps it doesn’t matter to anyone else but it was a very sad day for me when I saw it was gone. I spent forty years in the movie theatre business. I saw countless changes in the industry from carbon arc and twenty minutes reels to digital presentation. In my opinion it is a dying industry largely because of the entertainment options that are available to people at home but also because greed on the part of movie stars and theatre owners coupled with the lack of respect theatre owners show their employees particularly theatre managers.