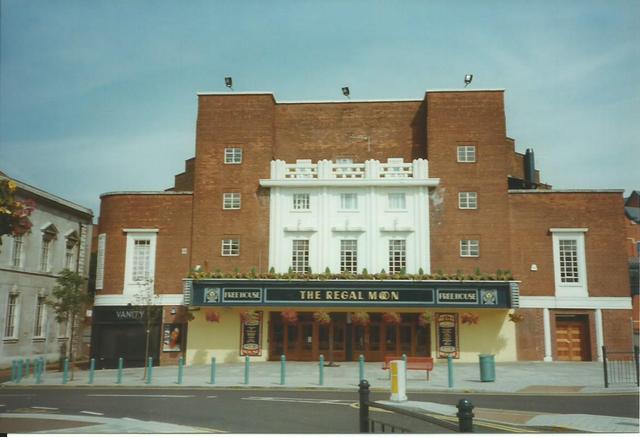 The Regal Cinema welcomed its first patrons on 16th May 1938. It had been designed for Associated British Cinemas(ABC) by architect Leslie C. Norton with ABC’s ‘in-house’ architect William R. Glen, and had a fine location in the northern town of Rochdale. With a total of 1,901 seats (1,208 stalls and 693 balcony) the Regal Cinema was re-named ABC in around 1962. It closed in January 1978 for tripling.

The new cinemas opened in March with screen 1 seating 538 (the former balcony) and two rear stalls cinemas seating 281 & 199. The ABC was renamed Cannon in around 1986 but closed in October 1992.

It was then very expensively de-tripled and restored to its original appearance for bingo. This proved short lived however and the ground floor has now been turned into a pub by the J.D. Wetherspoon chain which opened on 20th November 1997, and is known as the Regal Moon.

Sadly all cinema decoration was stripped from the former stalls area and a false ceiling inserted across from the front of the circle. Windows have been opened up in the sides and the wall behind the screen also has had several doors inserted. The former circle is decorativly intact, but is not seen. J.D. Wetherspoon are normally very sympathetic to the buildings they convert into one of their pubs. In this case, it is a really bad example.

Pictures from the interior…