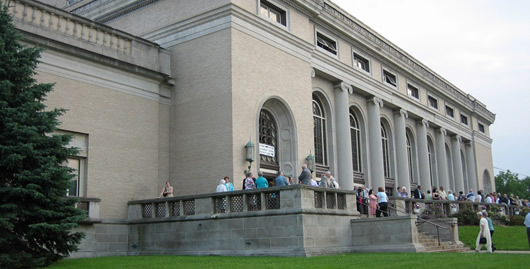 Once one of the largest and most magnificent buildings of it’s type between New York and Chicago, this 2,800 seat auditorium has had a wide variety of entertainers grace its stage. From national stars like Jerry Seinfield to local treasures like the Pittsburgh Symphony, the New Castle Consistory Men’s Choir, and the New Castle Regional Ballet, the Scottish Rite Cathedral has something to offer everyone. The auditorium also boasts a Mueller 4-Console Organ, which has over 5,000 pipes to create its wonderful sounds. It is connected to a player piano, which is played from the organ keyboard. There are only two of these in existence.
The Scottish Rite Cathedral is the reality of a dream of the llustrious John S. Wallace, who lived next door to where the Cathedral now stands, and he wanted a place large enough for all Masonic groups to meet.

Following the financially devastating Great Depression, The Mason’s could no longer afford the building and, in 1970, it was sold to a private, non-profit group. In the late-1930’s and 1940’s David Victor, a PA theatre owner, and others ran first run movies in the massive (listed as 3,000-seat), ornate Cathedral auditorium. None found much success. Neither the community nor the film companies seemed interested in supporting this magnificent structure

The architect was Mr. R.G. Schmidt and the contractor firm was S.M. Seisel, both of Milwaukee, Wisconsin. As they were building, they ran into quicksand, a rare find on the side of a hill! The quicksand rose from the back of the building, so to ensure the building was sound, they added piling. The cornerstone was laid in 1925. The ceremony for this event was quite an event for New Castle. Thousands of spectators joined the celebration. The Cathedral’s first official use was November 8, 1926.

The Cathedral website has much information and some good interior and exterior photos including the auditorium, ball rooms, etc. It is a very worthwhile site to visit, on line or in person.

About the organ, somethings rotten in Denmark and Mathies Moller was born in Denmark!

I know the info on the organ came from the info provided by the Cathedral. I’m not a great expert on pipe organs but, the console is the framework containing the keyboards, stops, pedals, and other controls of the organ. I have never known of a pipe organ that had 4 consoles. That would mean it would need 4 organists. A few organs have had 2 consoles. I sure what was meant was that it had 4 keyboards or what are called, 4 manuals.

I have never heard of a Mueller Organ. I have heard of Margaret and John Mueller who are organist, but that dosen’t count.
There was a Muller Organ in the Netherlands around 1735, so I don’t think that counts.
What makes the most sense is Mathias Moller’s, Moller Pipe Organ Company of Hagerstown, Maryland (just south of the Pennsylvania border) which went into business in 1875 and made something like 11,000 pipe organs. I could find no record in old organ records of an organ ever being installed, but that would have been about 85 years ago. I would guess because of financial problems back then it was either reposssed or sold. I bet it’s no longer in the theater, but I hope it is. What do you think?

Anyone have more info, more info on the organ, or more photos?

Thanks for the clarifications!
I will check with my “expert in residence” in New Castle to see if the organ is still there.
Will report.

Not only is the organ still there, it’s being restored! The following article has all the details including a special concert in October to kick off the restoration project. A great chance to see this magnificent building!

The Moller Pipe Organ is still exists and is being restored. It also has a Artiste Roll Player Unit and the Cathedral owns all the original rolls. In recent years, organ concerts and silent movies with live artist have occured with great success. Profits from these events are going into the organ preservation/restoration fund. You can go to the Cathedral web site for concert/movie schedules. I know there are plans for “Phantom of the Opera” (Lon Chaney)to be shown on Halloween evening, 10-31-14 with live organ accompaniment.

The organ console is located in the orchestra pit and has its own elevator. There are 5 chambers located on each side of the prosidium arch (Left: Choir, String & Solo; Right: Swell & Great (which houses the enclosed and unenclosed great divisions and pedal). The Organ contains only 3 percussions: a Deagan Harp, Deagan Chimes and a piano playable from the console.