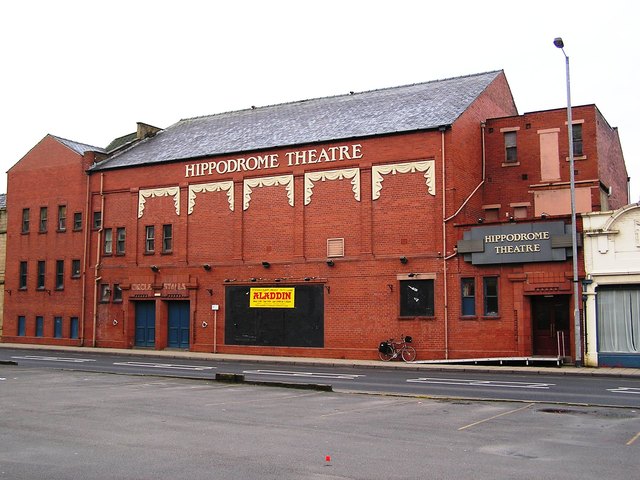 The Todmorden Hippodrome opened as a live theatre on October 9, 1908 with “Two Lancashire Lasses in London”. Seating was provided for 1,500 in orchestra stalls, pit and balcony areas. By 1911 film interludes were part of the programme and by 1917 movies had all but taken over.

It is externally a plain red brick building slightly outside the town centre in Halifax Road, which has probably aided its survival. Inside however there is attractive Edwardian Baroque style plasterwork on the front of the balcony and around the proscenium arch. The auditorium remains very much as built with the exception that the former ‘pit’ (rear stalls seating beneath the balcony) has been walled off to form a large bar/foyer space for the theatre.

The Hippodrome was the first cinema in Todmorton to present the ‘talkies’ which arrived on 17 March 1930 (“Broadway Melody”), it was boasted at the time that it was the best installation in the north of England.

However it was also the first cinema in the town to close in June 1956 and was leased to the Todmorden Players and the Todmorden Operatic Societies who still own it. A huge amount of renovation work has been carried out over the years and the Hippodrome Theatre is a popular venue for local amateur and small scale professional theatrical productions. It now seats 495.

In recent years occasional film shows have been introduced as part of the programming.

The Todmorden Hippodrome has this year (2005), has begun to put on films on a regular basis.The films are being put on by through the auspices of the Todmorden Silver Screen Group. The group can be contacted through .uk

Two 1994 images of the Hippodrome here:–

Film shows are continuing at the Hippodrome, under the “Electric Palace” banner, using a digital projector. Meanwhile stage shows continue unabated, flooding in the Upper Calder Valley permitting – the theatre (and town) has now been flooded three times, but a new defence plan has just been announced.