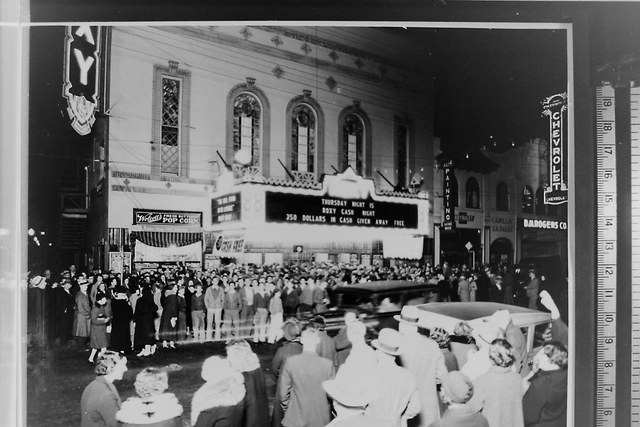 The Cline Theatre was opened in around November 1916 with 1,600-seats. It was operated by Reavis & King. It was renovated and remodeled, reopening on as the renamed Roxy Theatre on July 20, 1934 with Edmund Lowe in “Let’s Fall in Love”. The Roxy Theatre operated into the 1960’s.

This recent article in the Santa Rosa Press-Democrat is about two large stained glass windows that were in the Roxy Theatre, and are being offered for sale by their current owner.

The Roxy opened around November, 1916, as the Cline Theatre, built by local physician Dr. John Cline. In its early years it was operated under lease by a bay area theater man, whose name I’ve found variously spelled as Thomas G. Reaves and T. C. Reavis. The house featured movies and Orpheum circuit vaudeville.

The Roxy might have operated as late as 1969, when the building suffered structural damage from a pair of earthquakes that struck on the night of October 1, but the house might have already been closed by that date.

A. A. Cantin could have been the original architect of the Cline Theatre, as he was licensed to practice by 1916, but the work done by Cantin & Cantin might have been only a remodeling job sometime later.

This was renamed Roxy on July 20th, 1934. Grand opening ad in the photo section.