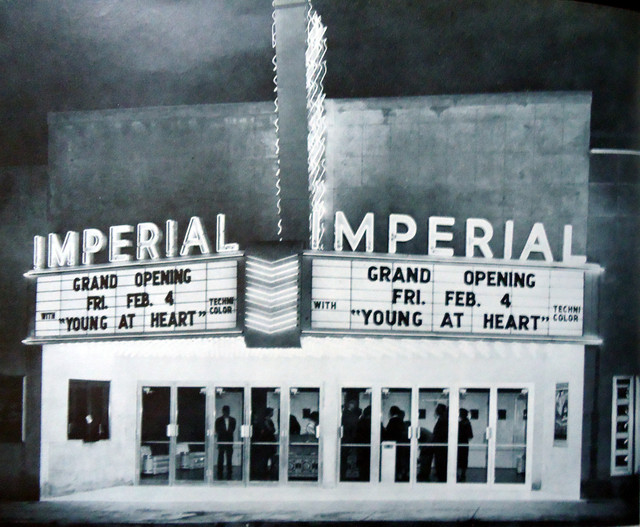 The Imperial Theatre was opened on February 4, 1955 with Doris Day in "Young at Heart". It was a modern looking building, but rather plain both externally and internally. All seating was on a single floor.

The Imperial Theatre was operated by Newman Theatres and was closed October 2, 1965. It reopened as an adult theatre, named Roxie Adult Theatre December 11, 1970 and closed February 1971.

Sure could use an address, more info, and photos.

Very simple looking,rather dull.J.E.Newman was the President of Newman Theatres,They owned the town in the 50’s.

The theater was located in downtown Waco on Austin Avenue, between 8th Street & 9th Street.

The Imperial Theatre was new-build facility launched February 4, 1955 with “Young at Heart” at 810 Austin Avenue. While downtown theaters across the nation were being replaced by parking structures, the Imperial bucked the trend by becoming a theater replacing a short-lived parking area. And the results weren’t too good. The $200,000, 6,000 square foot facility would start with 950 seats and would be just 800 seats at closing due to renovations during its operation. It had a curved 42x23' screen.

This was the second Imperial Theatre in Waco as the first was a vaudeville house that would become the very short-lived home of the original Hippodrome in Waco which took over the Imperial space in 1912. (However, the Hippodrome would build a new facility in 1913 where it still was more than 100 years later.)

The “new” Imperial started under the auspices of Newman Theatre Circuit run by Ed and George Newman of Waco’s Orpheum Theatre. The theater wasn’t a home run and Newman ceased operation in 1962. It became the Waco Evangelistic Center early in 1963 before moving. Pre-Cinemark LeRoy and J.C. Mitchell took on the theater reopening on June 14, 1963 with “One Eyed Jacks” and “Sergeants 3.” It closes for a short period and re-opens. But the theater struggles mightily. The Imperial closes in October of 1965 as the Lake Air Cinema is set to become the first new indoor theater to open since the Imperial. The Imperial appears to close October 2, 1965 after “Move Over Darling” and “What a Way to Go.” And if that’s so, what a way to go.

After a period of vacancy, the final life for the Imperial is as its final name as the Roxie Adult Theatre. It joined the Capri and the Art 16 as Waco’s adult theaters. The Roxie theater opened December 11, 1970 and the constant, daily raids at the theater from the outset lead the employees to seek relief in Austin just four weeks after the grand opening and one day after an employee at one of the adult theaters reportedly committed suicide. The Roxie appears to cease operations after just two very turbulent months in February of 1971. The property is listed for sale by October of 1971 and would later be demolished returning to parking lot status.