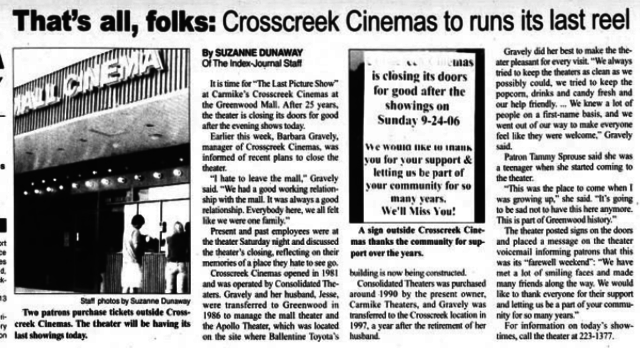 Small little 3-screen cinema in a small one level mall. The Crosscreek Cinemas was opened by Consolidated Theatres on July 17, 1981. It was closed on September 24, 2006. The marquee is still in the front of the mall, but instead of movies playing; the mall is using it to advertise stores in the mall.

Operated by Carmike Cinemas since 1990, and located on State Highway 72, the Crosscreek Cinemas were most likely closed when Carmike built a 10 or 12 plex right up the road heading west.

The Apollo ½ and Cross Creek Cinemas were part of the Consolidated Theatres chain, definitely in the 1980’s and before. Carmike bought most of Consolidated’s screens in 1989, is how they acquired them.

Thanks GMNASH.Any info on Downtown Theatres in Greenwood?

You are welcome Mike. That marque stayed up for over 3 years after the theater closed and was finally changed in late 2009.

The 10 Screen Theater up the Bypass became REI Cinemas in June 2011 again and we are glad. I wish they would put that on here.

I only saw a few movies at the mall. I remember you had to buy tickets for Passion of the Christ days in advance. Runaway Jury was fuzzy through the whole movie.

This cinema did not close in 2000, it closed in 2005 or 2006. I worked at this cinema as a minimum-wage grunt in 2004. I remember watching the test showings of the Passion of the Christ and Return of the King. I remember splicing the films! The film machines were dinosaurs! There’s a reason this cinema shut down. Everything was too old. I loved working there though. I remember climbing that dangerous marquee and almost falling during a rainstorm! Good memories…

I worked at the Apollo in the mid 70’s as a teen. Most fun I’ve ever had and I’m sorry to see it’s gone.

HEARD THERE WAS another drive in in GREENWOOD from a local, HWY 25 Drive in.

Vardoon, you are absoulety correct. I should have looked closer when writing that post in 2011. The mall theater closed in Summer 2006, not 2000.

Mike Rogers, yes the drive in here is open. You can see double features there. .

The Crosscreek Cinemas 1•2•3 in Greenwood Mall launched July 17, 1981 with “Stripes,” “The Great Muppet Caper” and “Endless Love.” Consolidated Theatres Inc. Circuit operated the theater likely on a 25-year lease. The 600-seat theater became part of Carmike in 1990 when Consolidated was purchased. The Carmike Triple Crosscreek Cinemas at Greenwood Mall closed Sept. 24, 2006 with “Jackass: Number Two,” “Flyboys,” and Everyone’s “Hero”. (Technically, this three screener – 200 seats per auditorium – was always three-screens and known as the Crosscreek Cinema and not the Greenwood Mall Cinemas. However, the generic Mall Cinema was what was above the exterior entrance door which could explain the entry’s title.)