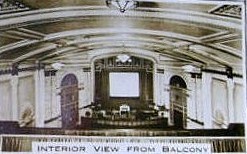 Located in the south Manchester suburb of Levenshulme, on Moseley Road at the corner of Kingsway and Fortuna Grove. The Kingsway Super Cinema was opened on 14th March 1929 with Dolores Costello in “Glorious Betsy” and Cara Bow in “Red Hair”. Initially operated by the Snape & Ward circuit, in 1932 architect John Knight was employed to make alterations and to redecorate the cinema. It was taken over by the Union Cinemas chain from 24th February 1936. Union Cinemas were taken over by Associated British Cinemas(ABC) in October 1937.

The Kingsway Super Cinema was an impressive building at a major intersection. It had a highly decorative white tile facade around its corner entrance. Inside the auditorium the seating was located in stalls and circle levels. The proscenium was 42 feet wide and the stage 16 feet deep. There were six dressing rooms. There was a Jardine organ (billed at opening as the ‘Rex/Gloria Organ’), which was re-built by the Compton Organ Co. in 1937. The cinema also had a cafe attached, for the convenience of patrons.

The ABC chain continued to operated the Kingsway Super Cinema until the night of 26th June 1957, when after the evening performance of “Tammy” and “Appointment with a Shadow”, it was badly damaged by a fire. It never re-opened, and the building was used as a storage facility for ABC Cinemas for many years. It was demolished in the early-1970’s. A small office block named Apex House was built on the site.

A vintage photograph of the Kingsway Picture House, around the time of its opening in 1929:
View link