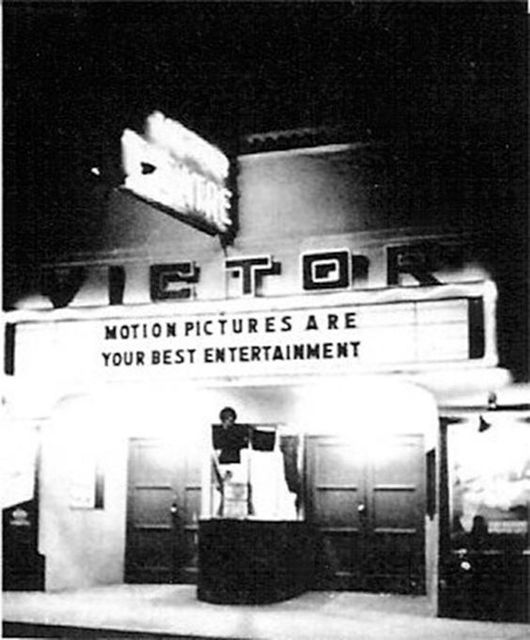 A California historical marker points out that the Halstead building housed the first bank in Victorville. The Southwest Portland Cement Company built it in 1917 and according to the Daily Press had been owned by the Robertson family for three generations.

At 7:45 am on April 2, 2010, a fire gutted the building, which was home to five stores that unfortunately shared a common attic. The fire department said the loss was put in the millions. Arson was suspect as there has lately been a series of suspicious fires in the Old Town area.

Fortunately the Route 66 museum, which is separated from the building by a parking lot, was saved from the blaze as they have a photograph of the Victor Theatre and other old Victorville theatre information.

Part of the 1942 movie THE HARVEY GIRLS was filmed in this area.

The Victor Theatre might have been the house called the Victorville Theatre that was on the “New Theatres” list in the May 21, 1936, issue of The Film Daily.

The New Victor Theatre opened May 26, 1945 with Faye Emerson in “Hotel Berlin."9 The Mesa Theatre was the local movie house that launched in 1936.)