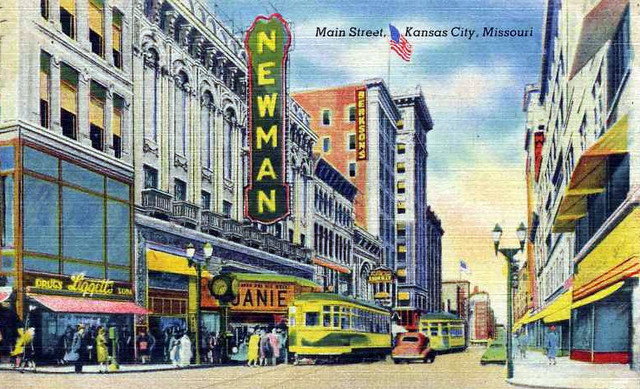 Located in downtown Kansas City, this theatre was formerly known as the Newman Theatre when it opened in June 1919. It originally had an Austin pipe organ and later in 1925 this was replaced by a Wurlitzer style 260. A 3 Manual 15 Rank organ with real 32ft Diaphones. The organ is currently in a private home in Zanesville, Ohio.

In 1941 it was operated by Paramount Pictures Inc. and was re-named Paramount Theatre on June 15, 1947. From January 29, 1969, it was briefly known as the Towne Theatre after it had been converted into a 4-screen cinema by architectural firm Lund-Balderson.

Thanks for posting the photo Don.

I worked at the Paramount in 1965 abd early 66. The wonderful secrets that builting had especially behind the screen on the old stage. It was a large performing arts stage and much of the organ pipes and effects were still there. No one knew that the organ was downstairs on a lift until the theater was demolished. There was a grand piano, drums and a harp behind the screen sitting to the side of the stage. Also, we went into the ceiling where you could see the equipment to lower the beautiful lights for cleaning. A very young Thomas Hart Benton painted most of the murals that were pricesly and simply demolished. No one cared, not even the so called Landmarks Commission. Stan Durwood knew about them when he had it converted to the Towne IV and was careful to not destroy them but cover them up. I doubt that he woudl see that theater demolish 4.5 years later for one of the uglist buildings in downtown KC. The Roxy went too and could have been a wonderful playhouse incorporated into the City Center Project. No vision aat that time.

I recently was watching a deluxe DVD of the film “Funny Face” from about 1956. The secondary DVD goes into a elaborate description of the VistaVision film process. I worked at the Plaza theater, among others, and never realized what that process entailed. I found out it requires a special projection system and a VERY large screen, which most theater owners balked at buying because of the cost. I just wondered if anyone knows if the Paramount theater had one. Anyone know?
Thanks.

I can remember as a child, being downtown with mom, standing on the east side of Main street, watching them take down the Newman Theatre sign, and starting to put up the Paramount sign.

Became Paramount on June 15th, 1947. Another ad in the photo section.

Reopened as the Towne 4 theatres by American Royal Cinema (another name for Durwood Theatres) on January 29th, 1969. Ad in the photo section.

In 1970, AMC Theatre and architects Lund-Balderson won a Quigley Award for Theatre Design in the conversion of the Paramount Theatre into the Towne 4. But the theatre failed to attract moviegoers to downtown ending its run after just three years on February 6, 1972. An urban re-development plan was announced followed by auctions of the AMC Towne 4 and the Roxy Theatre. Both theatres were then razed.