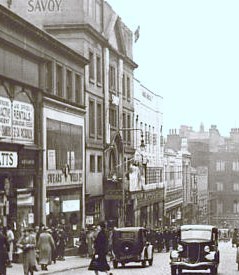 The Savoy Cinema was opened on 29th March 1920, screening "The Prince of Wales’s Tour of Canada". The purpose built cinema took advantage of the sloping ground from Darley Street to Piccadilly. Seats were provided in stalls, a horse-shoe shaped balcony, and gallery levels. The cinema had a cafe attached.

It was independently operated, and was soon taken over by Associated British Cinemas(ABC). In 1928 a Jardine 2Manual organ was installed, and the Savoy Cinema was the first in Bradford to screen a ‘talkie’, when Al Jolson in "The Singing Fool" was presented on 9th March 1929.

The Savoy Cinema was closed on 15th April 1939 with Peter Lorre in "Mysterious Mr. Moto" and Stanley Lupino in "Hold My Hand". The building was purchased by the adjacent Marks & Spencer’s store in July 1939. It was demolished and an extension to M&S store was built, which still operates today.