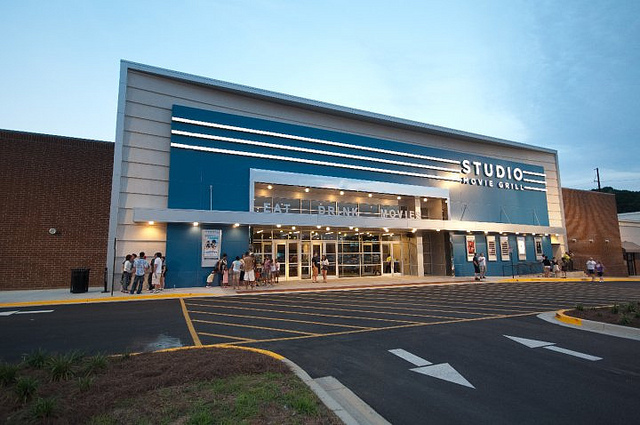 The theater is in an old grocery store, restored beautifully into a modern theater, opening in June 2010. Walking into the lobby feels nothing like a typical movie theater. Gone are cheesy video games and greasy pop corn stands. It is more like an upscale waiting room with a bar. You wait until they call you to enter the theater. It is almost like a train station or an airport terminal.

The theaters themselves are different of course. Each horizontal isle has seats on either side. The seats closest to the screen have a long bar-like table. On the other side of the isle are little tables big enough for two people. The little tables are perfect for a couple on a date because you have a tiny bit of privacy. On the other hand, these seats have more obstructions when Quasimodo walks by with drinks. If you want to avoid seeing the servers, sit at the bar seats.

You sit on chairs that are a lot like the big chairs in a conference room at work. They are comfortable but nothing like traditional theater chairs.

On each table is a little button and a red light. Pressing this alerts the staff that you need attention. The servers are very attentive and any of them can wait on you. I found that they have a small army of wait staff in each theater. We didn’t have to wait long at all when our button was pressed. The staff all carry little hand-held Palm-OS looking things to take orders. Very high tech.

The movie watching experience was nice. You can feel the quality in their projectors and sound system. The basic ticket prices for movies are in-line with traditional theaters in Alpharetta.

All in all, I thought it was a cool theater. The food isn’t anything to write home about, but I kinda expected this. There is some disruption to the movie from the wait staff but I expected this as well. They do indeed try hard to minimize the interruptions.

It was closed on March 16, 202 due to the Covid-19 pandemic. It was announced in January 2021 that Studio Movie Grill had gone out of business and the closure would be permanent.

thanks Alonzo.I still believe theatres should be Theatres.Eat a good meal down the street.

ALPHARETTA, GA â€" Studio Movie Grill, Dallas-based pioneer of the highly successful â€œmovie grillâ€ concept, has chosen the edge of Roswell/ Alpharetta, Georgia as the next step in its national expansion. The state-of-the-art theater complex at Holcomb Center, 2880 Holcomb Bridge Road will open to the public in May 2010. Studio Movie Grill combines tempting made-to-order food from an extensive menu featuring premium spirits, margaritas, wine and beer with first run movies, 100 percent digital projection enhanced by Dolby Surround Sound and Dolby 3D. SMG will be the largest all digital theater in North Atlanta boasting the most 3-D units.

With a proven track record under its belt, Studio Movie Grill co-owners Brian Schultz and Martin Massman believed the concept was ready for national expansion. They strategically selected the Atlanta suburb of Alpharetta to serve as its newest location. The area demonstrated a high demand for first-run movies, but was devoid of an in-theater dining experience. The Holcomb Bridge location will house a 40,000-square-foot, nine-screen upscale theater, complete with Dolby-digital projection.

Studio Movie Grill will anchor the newly enhanced Holcomb Center on Holcomb Bridge Road and is sure to be an added attraction to the vibrant and rapidly growing surrounding community.

Thereâ€™s something for everyone at Studio Movie Grill. Alongside first run movies and summer blockbusters, youâ€™ll find SMG with a Twist, alternate programming including 3D concerts, independent film and documentaries, and special needs screenings.

That’s all I can add.

GREAT write up and photos, others should take lessons from you!

Looks beautiful but I also would rather just see the movie and have my own popcorn. The Arclight in LA has the right idea, digital projection and no tolerance for talking or cell phones on.